Ok, first of all. That title was a joke based on the play when the character of Lady Bracknell says: A HANDBAG?!? ok cool, we can now continue with our planned telephone call.

How's it going future anna? Present anna seems to be doing so much. ahhhh. As well as working, learning to drive, FILMING A SHORT FILM NEXT WEEK (my dreams are coming trueee!) and eating, I am kinda helping to direct a play. If you hadn't guessed what the play is already (Handbag, Lady Bracknell...), a drama group that I am part of in a town near me is performing 'The Importance of Being Earnest' next month! How exciting!!

Ok future anna, I am going to provide you with the details incase you forget:


So what is the point of this blog post I here you ask.

Well one point is so that you can remember the dates of the play in years to come so you can look back and be happy and also remember that you were going to audition for the play but then you booked tickets to see MELANIE THE QUEEN MARTINEZ on opening night so James asked you to help direct instead which is very friendly but you still feel bad but MELANIE MARTINEZ. (There will be a melanie inspired blog post after I have seen her, stay tuned kidzzz).

But the main point is so that after years of sorting out folders and losing bits of paper and hopefully moving into my own place, you can still look at the poster for the play WHICH YOU TOOK THE IMAGE FOR! WHAT?!?!!? I know to some people this is really stupid and anyone can print out there picture and hang it up, but this is professionally printed and I want to be a film director/photographer in the future as my job, so the fact that James put MY  image on the poster makes me feel amazing and professional and so happy and yaayyaya!! So here is the poster for future reference (or if you lose the original which you probably will because I don't think future anna will be too different from present anna): 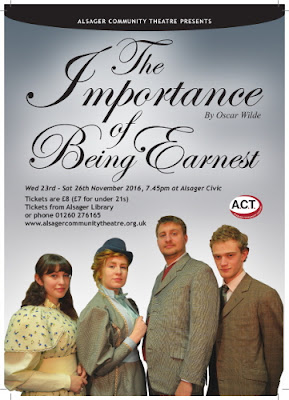 If you're reading this and you aren't future anna, feel free to come along and support the play!!

I am super excited to see everyone perform it in costume with the set and with lights and with everyone and IT'S NEXT MONTH!!

My/your granddad wanted a copy of the poster to keep because he was also excited for my image to be on it, but then he asked me to sign it. WHAT? hahah! I couldn't believe it! I sat down and practiced my autograph for 10 minutes then carefully wrote it in the corner. He was super happy! I felt famous!

So that has been the main thing happening I my life right now! I will update you with a blogpost after Saturday 26th (the final night) with pictures and how it goes! See you soon future anna!