Still in the land down under anna, are you in the uk currently or somewhere else? Anyway, that's not what i wanted to talk about. Today, as well as watching tv and drinking ribena (which is all i seem to live off of in Aus), i met kate.

Just under 3 years ago, i was still doing diys and things on youtube. One day, a channel called GEEK GALAXY left a comment saying that she liked my videos and wanted to know if i wanted to do a video collab. I had never done anything like this before and never really spoken to anyone through youtube before. We started speaking and decided to do a collab video about tetris as we both loved playing it. Geek galaxy AKA kate, did a video on tetris shaped rice krispy treats and i did a video on a tetris charm bracelet. They are here in case you want to see them in the future:

After making the videos, we kept in contact through messaging and instagram/twitter. She opened a nail business (@thedaintynailspa on insta) and i made films. We have kept in touch on and off over the last 2 and a half years.

When i found out i was going to Sydney for 3 weeks, she said it would be great to meet up, but as Canberra (where she lives) is 3 hours at least drive away, it would have been difficult. Her amazing mum drove her all the way and we met. It's still so surreal thinking about it.

We went to the Macquarie Centre which is a massive shopping place. We visited Daiso (picked up some japanese bargains!!) and had lunch at a super cool sushi place! It was so much fun eating cronuts and singing along to uptown funk which seemed to come on in every shop. 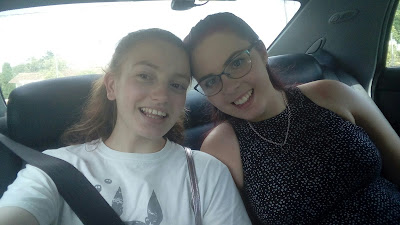 I am so thankful for kate coming all the way to see me. I have always been taught to stay safe online which i completely agree with. I love shows like catfish which really make me think about people i speak to online. Although as soon as a spoke to Kate, i knew we clicked, whether we could meet or not. I don't know if i will ever be able to see kate in person again, so i will cherish today. I wonder if you have ever met up again future anna? I hope so. Also, have you met anyone else online who could be a lifelong feiend?? Speak online later future anna xoxo