Call Me About Your Current CD Collection!

hello future anna, as you know and probably still do, I like CDs. a lot. I love holding a physical copy of the music I love by artists I admire so so so much. it's such a magical feeling to hold it and play it. I was going to start collecting records, BUT THEY ARE SO EXPENSIVE!! Maybe you have started collecting them future anna? well, I thought I could do this post about the CDs I currently own, and then in a few years, you can do it again future anna to see how your selection and music tastes have grown. so... on with the collection!

from left to right:
So that's all the CDs I currently own. As you can see in just this list here, there are many more CDs from just these artists I want to own, never mind all the others I want. I wonder if you own all the CDs on your amazon wish list future anna? I understand this collection might be small compared to others, but I love all the CDs I own, and would own many more, if they were slightly cheaper, and Spotify didn't exist.

ALSO, there are so many more CDs I would own, but don't need to because someone else in my family has them that I can borrow (e.g. ABBA, Ed Sheeran, Tom O'Dell, Blondie, Disney, Dire Straights, Adele, The 1975, etc), however I probably will buy them when I move out, unless CDs no longer exist, or I have too many that I can't fit them anywhere.

Now, I think I have always been a fangirl. the first band I freaked out over was S Club 7. THEY WERE THE BEST!!! I was even part of their little online fanclub and got sent tattoos and cool notes and things. however, when we moved house, the worst thing happened. I lost it. it was really sad, and I really want to rebuy it, but it won't be the original one I had, and I can still listen to it on Spotify. So, that was the first CD I owned. the next was the Hannah Montana Album. can we take a moment for Hannah montana. THAT WAS MY JAM JAM JAM!! and still is tbh. haha! I still have the CD and the lyric book, but the plastic case broke. I keep it in a little CD wallet along with the rest of my collection, but didn't show it. sorry. apart from these 2 situations, and a few CDs that I have found at charity shops that are slightly damaged, I try to keep my CDs and their cases in the best possible condition. it makes me so happy which is probably the saddest thing I have ever said! Anyway, without further ado, and ignoring all the broken cases and loses, this is the longest CD and case I have/owned. It's the Miley Cyrus 'Breakout' album and I still know every single word. do you still future anna? It is a chapter of my childhood where I was at the end of primary school and beginning to find myself. the fact that Miley was doing her own thing aside from Disney stuff inspired me so much! and it is one of my favourite albums. EVER. 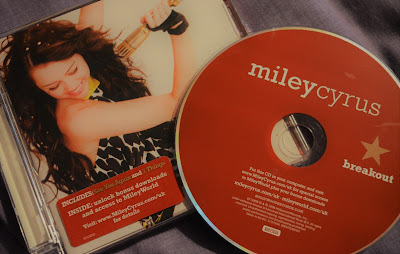 Next, i'm going to show the 2 albums that I CAN SING EVERY SINGLE WORD TO! if a gun was held to my head and I had to sing every song, I would survive. I would risk my life. The first one is Katy Perry 'One of the Boys'. Even though I didn't have this album when it first came out, I feel like I have made up for it by how many times I have played it. Just like the miley cyrus album, it inspires me to step out of my comfort zone and get my dreams. the first song I heard from it (and katy herself), was 'Waking Up In Vegas', and it is still my favourite from this album. The second album I know every word to is 'Sigh No More' by Mumford & Sons. when I got this, I PLAYED IT NON STOP! I would ask my mum if we could play it in the car, and i'm sure my family know every word to it as well because of this! I love the different instruments and of course MY LIFE IS IN DEBT TO MARCUS' VOICE! 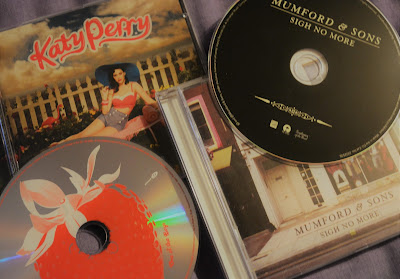 And finally, I thought I would mention my go to albums. these are albums I reach for when I don't know what mood I am in, but always make me feel so happy! I chose these 6 because it would make the picture symmetrical, and I couldn't leave any of them!! haha, whether listening to them on Spotify on the bus, or in my room with the CD, one of these albums is probably playing! I really recommend them if you aren't future anna, and are spying in on our call, and if you are future anna, hey! I hope these are still some of your faves!

So that's it for this post future anna. I think if I wrote anymore you might die of bordem unless you are already dead. oh gosh, I hope I have had chance to update this before you die. fingers crossed ay! anyway, keep me update don your music purchase, and we will chat soon, byeee :)

P.s. if you aren't future anna and are spying in on our call, what are your favourite albums you own/want to own?
at 22:50