(beep)
hello future anna! remember that I did that lil visual poem thing a while ago? well I have recently worked on another one and it's a modern day sonnet about how I feel love works nowadays. people are scared to tell the person they love that they like them as they are worried they won't like them in return, which can then complicate everything! If you're reading this and you're not future anna, this poem isn't based on anyone I know, i have taken inspiration from films and tv shows that i have seen lately. the funny thing is, I didn't even realise I had written this in the form of a sonnet until I finished it and realised that the number of lines looked familiar. thanks gsce English.
i will include the gallery and sonnet here, but if you wanna see it in its proper order, click the link here: http://annasnothere.blogspot.co.uk/p/photography.html 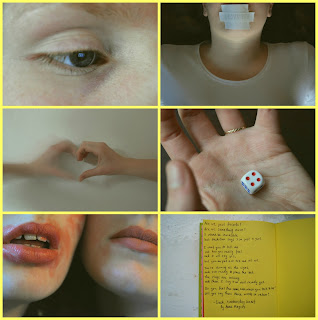 Are we just friends?
Are we something more?
I wanna be invincible
but tradition says I'm just girl.
I want you to tell me
just how you really feel
and I will say yes,
but you might not ask me at all.

You're showing all the signs,
and I'm ready to place the bet.
The rings are rolling
and then I say I'm not ready yet.

Do you feel the same even when you talk to her?
Will you say those three words in return?
CRUSH - ANNA MAYERS
oohhh how exciting, ey! i am also working in two more lil visual poems, but with video rather than pictures, and then another picture one! hopefully i can finish them soon! hopefully you are still working on them future anna! bye!
(beep)﻿
at 21:50