There Is Signal Up SNOWDON 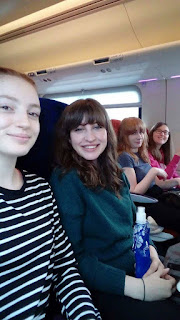 hello future anna! I am currently sat on my bed writing this. um... duh. hahh! anyway, yesterday, along with 3 super cool people, I climbed Snowdon! yes, the mountain in Wales!

so, the day started with me waking up about 7am, getting ready, and then jumping (not literally but it's a good word to use) in the car to go to the train station. my mum dropped me off about 9am, because she had to go to work, however the train wasn't actually going until just before 10, so I had a bit of time to kill. Beth (sat next to me on the train in the picture), who organised the trip for a late birthday gathering, said that she would meet me earlier! so she arrived about 9:15, we picked up the tickets from the machine OMG THERE WERE ABOUT 57 TICKETS FOR SOME REASON UM OK?!?/?!? and then we went onto the platform. I had only had a tiny yoghurt for my breakfast, so we went to a café on the platform and I bought a banana and strawberry porridge thing. it was alright, but I found that the oats were a bit chewy. I still ate it though. we were then going to meet Rach and Amy from their train but we decided to hide for the banter, but then we missed them coming off the train and they didn't spot us so they walked off and we were all like um ok where are the others??

I tried  to ring rach and beth tried to get hold of amy and it was a bit of a crazy moment, but we met on the platform, where the train was going to be for our journey to bangor. When we got on the train, some people were already sat in our reserved seats, but we let them have the table and we found somewhere else. the journey was just over an hour and a half and it was lovely seeing so many amazing sites outside of the window! we stopped at a few stations which made me feel nostalgic about holidays I went on with my family when I was younger. we saw prestatyn, rhyl, flint, Llandudno, and we saw Conwy castle! We also took many selfies and my rap star alter ego made an appearance and we made up a new rap. oh gosh. hahah!! after arriving in bangor, we got the bus to Llanberis, which took about an hour. when we bought the train tickets, we also bought bus travel cards which meant all bus travel was included.

when we got on the bus, we showed the driver the cards and he was super confused as he hadn't seen them before. we wouldn't have minded paying again, but we were wanting to use these cards that we had bought. luckily, he let us on! haha! the bus journey had AMAZING views, it would be amazing to live around there and see those every morning! we also spoke to an elderly gentleman called Harold on the bus. he showed me his bus pass and told me he could get to Cardiff with it! I also heard some of his life story. He was nice and friendly and I hope he had a good day.
Finally we arrived in Llanberis! we went to the start of the path, and around there were a few touristy little shops and cafes and also a cute little film theatre!!! we went into the shop, bought a map, went to the toilet, and then started on our walk up Snowdon.

OMG OK I WOULD SAY THE HARDEST PART OF CLIMBING SNOWDON FROM THE LLANBERIS PATH IS ACTUALLY THE START WHERE IT IS SO FREAKIN STEEP AND YOU NEED TO HAVE A BREAK EVERY 2 SECONDS LIKE UM WHAT?!?! the hardest bit wasn't even on the mountain that doesn't make sense hahah! anyway, we reached a gate where the proper mountain started, stopped for a drink, and started on the climb of Snowdon!

It took us about 2 hours to walk from the start of the walk to the halfway house, which marks the halfway point to the summit of Snowdon. Along the way, we stopped for lunch, and we also stopped every now and then because we hadn't really prepared for the walk physically, so yeah, we had a few rests. the visibility was great, which we didn't expect, and it was also really humid, which meant that I only wore my long sleeve top, I didn't need my 2 jumpers and coat, but I had them just in case! it was so lovely to chat and sing and climb together, and I think I am going to list here some of my essentials so I can look back at this if I decide to climb/walk somewhere like this again!

Sweets are also a good thing to pack as they will give you little bursts of energy, and they are great to suck on if your ears start to pop because of how high you are! I took some super sour ones for the banter which turned our tongues blue! haha

so those were some of the things I would recommend bringing! let's now continue with the story. so we eventually got to the half way house about 3pm, and beth had said at the start of the walk, that at 3:30, we would need to decide whether to continue walking to the summit and then hope there was a train we could get down to be back in time for the bus, or we could head down and have more time to spare. we decided we would spend about half an hour at the half way point, and then head down! I treated myself to a large brownie and a carton of apple juice which were super nice! we sorted ourselves out, I text my mum an update (yes, I had signal up Snowdon, woop!), and then we stepped outside the café. omg everything was suddenly white. fog had ascended on us and we could just about see 20 metres (I would say) in front of us. it's crazy how fast the weather can change! it was also raining slightly so I put my coat on. we took a few pictures to pretend we had reached the summit (my uncle believed it) and then started walking down.

Let's just say that walking down is a lot easier than walking up haha! as we went down the mountain, the fog stayed up which meant we were able to see more and more and we walked and walked. we made it down about 5pm, and headed to the bus stop. the bus arrived about 5:25 so we had plenty of time to look at the photos we had taken and what our next adventure might be! unfortunately Harrold wasn't on the bus this time, BUT IT WAS THE SAME BUS DRIVER LOL WHO TOLD US WE COULDN'T USE THE TICKETS BUT THEN WE ASKED NICELY AND HE WAS LIKE UMMM SURE. so we got on the bus finally and travelled back to bangor! we found a weatherspoons in the town and had a lovely meal as we had about 2 hours before the train left for home. I ordered a veggie burger with chips, and I had a strawberry and lime kopperberg. lol when I ordered my food and drink, I then left the bar to go sit back at the table but then I remembered I left my drink. I then had to awkwardly go back to the lady and get it. she wasn't impressed, haha! the food was really nice and I really wanted to order a pudding but I was super full! next time I will order the whole dessert menu! before we headed to the train station, we quizzed ourselves on capitals of countries and flags and things and I didn't do very well because geography isn't my strong point, but I knew one thing about space that the others didn't which made me feel pretty cool! we then walked to the station, got on the train and set off, along with what felt like the entirety of the virgin train staff who were sat chilling in our coach. some good songs were played on the way.


it was such an amazing day and I am so so glad I went. whilst we were in the planning stages I was thinking of not going. for a few reasons. 1, I had never done anything like it before. 2, I was scared. those are the reasons. one thing my anxiety does is stop me from doing things I really want to do, but I decided that I wasn't going to let it stop me. I base most of my decisions on: if I don't do it now, i'm never going to do it. I basically forced myself to do it, but I am so so glad I did! this year for me has been full of things I wouldn't have done in previous years because of my anxiety, but I am trying my hardest to not let it stop me. normally things are small victories, but I would say that this is quite a big one. hopefully you are still living your best possible life future anna.