(p.s. the title is 'bonjour, i'm on the phone' in french because the film is called 'je m'appelle' and uses bits of french)

hello hello hello! I am currently catching up on the new season of twin peaks and converting some video files TO EDIT MY NEW SHORT FILM!! AHHHH!! Yes, between Friday 1st September and Sunday 3rd September, I filmed a short film with a few others which hopefully will come out at the end of this month/start of next month. I have been meaning to post a little production diary like i did with my other film 'the best days', but i just haven't gotten round to it til now. So, here is my lil production diary:

so this was going to be the smallest shoot day of the 3, because we just had the main actress for the whole day, and then 2 other actors (they had slightly smaller parts so were only needed for half days) coming (one in the morning, and the other in the evening) to film their scenes. It's weird because i wanna explain everything but i don't wanna give too much away, hahah! OK, the first scene we recorded was actually the last scene, and for this, we walked to the local village hall, set up, and began filming. Seren, who plays the main girl in the film, was a little late, so we played on the playground and practiced shots/camera angles. When she arrived, we began recording, but then i realised that she would need to be in her school uniform costume. As the village hall was closed, and it had began raining slightly, we ran to the post office and just hoped that they would let her change. luckily they did, then we ran back and filmed. I was really happy with how it turned out. we then headed back to my house (where the rest of the film was going to be shot), and had lunch. In the afternoon, we filmed a few small sections where we see Seren's character walk to different places, before we filmed the scene before the final scene which we had filmed that morning. does that make sense? Anyway, the actor i had originally asked hadn't got back to me about dates, so i asked if my dad would step into the role. he was more than happy to help, however when we did a quick line run, we were all in fits of laughter because of how he pronounced some of te lines. then when we tried to film, none of us could stop laughing. It was so silly, but it was hilarious! luckily, we managed to film it all in the end, and we were done for the first day! woo! i still had a few last minute things to do before tomorrow, but they were small things so i managed to get them done. even though pressure isn't great, i prefer to do things closer to the time they are needed because it pushes me to finish it, rather than procrastinate. anyway, onto day 2... 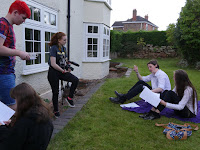 day 2 started well. i had breakfast, got everything ready, and then people started arriving! I had a few more crew members, and Adam as well as Seren for my cast! we spent the day filming the first half of the film, so all the magical garden bits! luckily, rain wasn't forecast, however the sun kept popping in and out, which made it difficult to know if we were coming or going, hahha! continuity in films is reallyyyy important to me, so i had my friend simon look after the props, and make sure everything was the same every take, however it's difficult to organise what the sun is going to do! we got it done in the end though. i had always planned the film poster to be the two main characters in the garden from above, so whilst we were all in these positions, i took some photos. to do this, i hung out the window of my brother's room, and again the sun interfered, so we had to move around a few times! when i was happy with my shots, and james was confident he had all he wanted (my friend who was filming/ doing sound bits), we stopped for lunch AND OMG WE HAD CHIPS AND PIZZA AND WRAPS BUT I HAD A CHIP WRAP AND I CAN TELL YOU THAT IT WAS BEAUTIFUL. truly it was. That afternoon, we worked on the montage section of the film, and we started with a bit where the characters are lying down, looking at the sky. AGAIN THE SUN WAS SHINING BRIGHT LIKE A DIAMOND THANKS RHIANNA, so we moved positions, but this meant i also had to hang out of another window to get the shot. the window we chose was in my sisters room, but the window doesn't open all the way, and there is a dressing table in front of it. let's just say that if i didn't have my friend beth to hold onto me, i may have fallen out of that window to get the shot. hahah! the rest of the afternoon filming was really really fun, especially when seren put cake in adam's face! I can't wait to edit that section. Day 2 was done, yet we still had day 3 to do, the biggest of all the days as it included filming the main scenes, and we would have nearly everyone who worked on the film coming to help. i was excited, yet a little nervous. i also told my mum to book a restaurant for sunday so i could take my family out for tea because i had taken over the house for the weekend and rearranged a load of stuff, so i thought it would be nice. thanks family for letting me make my crazy ideas become real. 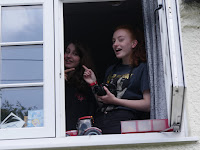 so today was the final day of filming. i was feeling a little tired because i stayed up late and woke up early, and slightly drained, because even though i like spending time with people, i need to have my own space to allow my brain to think, however i hadn't had that in a few days, so was a lil spaced out. however everyone seemed to be a little tires so it was alright ahah! i had my crew, i had my cast (after a few wrong satnav directions and miscommunicated (is this a word?) texts) and today was the day we had to get it all done. luckily i had looked at the weather forecast and saw that today was gong to be rainy and windy, which is why i planned to film the last scenes inside. well they were already scripted to be inside, but i had planned to film those 2 this day, am i making sense?? probably not but what's new?! on this day, james from saturday and another friend i have called james (we called them glasses and sandals on the day so people wouldn't get confused haha), looked after all the cameras and tech stuff so i could properly direct and organise things. For the last 2 days, i had organised cameras and tech stuff also, so it was really nice to pass that onto someone else. it hit me in the morning that something i had written was coming to life. i thought i was going to cry, lol. it just made me emotional for a second, but then i got back into the swing and lived my dream. it was really funny, because during one part of the morning, all of us, minus 3 (harry, liv and james) went out to film something outside of the house, however liv and harry didn't know james was still there. i looked at my phone and saw 2 messages from liv saying she was scared and that my house was haunted haha! we went back in and i said i was sorry that i didn't realise james was still there! IF MY HOUSE WAS HAUNTED I WOULD NOT NOT NOT BE HERE OK LETS STOP TALKING ABOUT GHOSTS NOW. we finished the first scene of the day and then stopped for lunch. i had another chip wrap with ketchup BECAUSE OMG YES AND EVERYONE ELSE TRIED ONE AND FELL IN LOVE TOO SO YEAH IT'S APPROVED GO AND TRY IT. please. after lunch, we filmed the final scene of the three days. i was a little worried we wouldn't get it all finished on time BUT WE DID YES!! this was the scene filmed in Liv's character's room, and we shpt it in quite a large bedroom, however with all the lights, stands, and people, it quickly became quite crammed. beth who was helpung me out on set, and i friend called nathan had made a song for this scene, and for some of the crew, it was their first time hearing it. i am so so proud of them for making it kinda last minute, and i can't wait to edit that scene either!! i love this scene because it's like me and my sister. we go from loving each other to arguing and repeat that every 2 minutes for our entire lives. if you have siblings, you probably understand. i really wanted a shot of seren from above when she is on her phone, and the only way we could really do this was standing over her. the ceilings in my house a quite low, so i said i would do it as the 2 james' are quite tall. as i stood over seren, you can probably guess what kind of jokes were made for a good few minutes. thanks guys. we finished, i started transferring files and hings, and then everyone went home. i was already at home, so i just stayed where i was. i sat down on the sofa, looked at the script and smiled. i couldn't believe i had got to live my dream yet again. first the best days, now this. wow. i went out for tea with my family (had my most favourite dessert ever which is red velvet/cheesecake cake and i put a picture on my instagram because it's beautiful and really rare), and came home to tidy up every room, and go to sleep. i also told my mum i would vacuum nut i never got round to that haha! 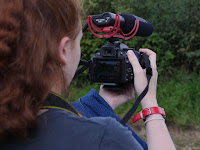 so that was my little production diary for filming Je m'appelle. like i said, i am only just getting started with the editing so it should still be a little while before it's ready, but i am very happy with how all the filming went, and i hope i can do it again and again and again in the future, however not in my house again because i have used every single area i could possibly use for filming haha!! thank you so so much to my amazing cast, crew and family, and anyone else who has helped in anyway, shape or form, and hopefully we can work together again in the future! That's all from me, i am on the second to last episode of twin peaks: the return, so i will carry on with that now, ok bye!

check out @mechchickmedia on instagram for more bts pics!