On The Phone With Pvris

hello futurue wait i typed too much haha! let's restart, hello future anna! i was at work the other day and i was describing a film to someone and they said i described it so well, and in such a cool way that i should look at writing reviews for films and other things. i felt pretty happy they felt that way. often when i feel passionate about something i don't want to bore people with it, but this girl brightened my evening and here is my first review on my blog. well, i think it's the first!

last night i stayed at my cousins house, we traveled to Manchester, ate and drank quite a bit in spoons, and then saw the band Pvris on their uk/european tour for their latest album 'all we know of heaven, all we need of hell'. To be completely honest, i haven't ever really listened to Pvris. My cousin and I saw them at leeds festival in 2015, but i hadn't really thought about them since. my cousin messaged me a few weeks before saying she had a spare ticket and asked if i wanted to go! i never say no to a gig! A few days before, i made a playlist with all of pvris' songs, just so i would possibly know an odd word or two! we turned up to the gig, and saw that there would be two support acts, so we went through to the large o2 apollo space with crazily high ceilings, and waited. 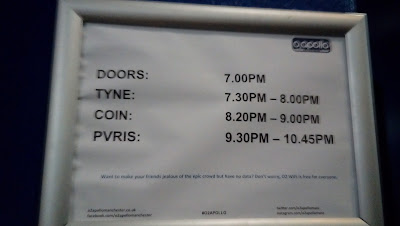 the first act to come onto the stage was called tyne, and i still don't know if this is just the stage name of the girl who sang, or the name of the band as a whole. i thought she was incredible. her voice paired so well with the changing music, and it felt so dreamy. i feel her voice is a mix of ellie goulding and melanie martinez, and i can imagine audrey horne listening to her in the double R diner in twin peaks, so she wins in my books. the only downside i felt there was, was that i couldn't really dance to the music, as it was quite calm. but i have already added tyne to my 'gals gals gals' playlist on spotify, (https://open.spotify.com/user/annaboomusic/playlist/1qreaaL8174VGUHEK9DNpC ) so i can't wait to listen to her beautiful voice again! infact, i am listening to that playlist now and her song 'somebodies something' is up next. weirdddd haha!

between tyne, and the next support act 'coin', we moved around quite a bit. this was just because we wanted to go to the bar, and find somewhere good to stand. after hearing the sweet yet modern melodies from tyne, i had no clue what to expect from 'coin'. i had heard of them, but only the name, nothing else. wow. they were incredible. if they ever do a second angus, thongs, and perfect snogging film, their songs could be the entire soundtrack! Coin were a mix of the 1975 (their lead singer had quite a few matt healy/healey/idk qualites about him) and walk the moon my cousin and i decided. they were wicked, and i imagine they turn the whole room into a dance party on their own tour. my favourite song from them on the night was 'talk too much', which is their most popular song on spotify and i can see why! the only thing i would say is that the song on spotify is quite tame compared to the exciting live performance, but i will still be listening to them. they awoke the crowd and were fab!
then came the main event, pvris! the show started in darkness with 3 thin screens flashing with white lines as a booming voice spoke. i couldn't work out what it was saying, but as the band walked out, the voice ended with saying the name of the album, and the song 'heaven' began. this was one of the songs i had learnt the chorus to quite well (well there wasn't much to pick up, haha), and the whole crowd came to life, screaming the lyrics back to the main singer. the vocals and the band were phenomenal, and you could see how each person was enchanted by the sounds and lights in front of them. the show was pretty black and white, in a colour palette sense, and in the sense that it was just a normal show. i really enjoyed the music, and the evening as a whole had been lovely. i know i am skipping ahead quite far, but the show ended on their hit from their first album 'my house'. this was the only song i had remembered from their leeds show. ok i just wanna quickly address something, i am making it sound like i don't care or the shows haven't been memorable, but i always find it difficult to watch a show that i don't know or if their are songs i don't know the lyrics too. it's like i'm not properly tuned in with everyone else. i thought the show was wicked, but i only knew 3 songs and those were the first one, and the final two, haha!


ok on with the blog post... as soon as i started, i knew what it was, and as it played, my cousin and i had a little rock out moment at the back so we weren't squished or surrounded by loads of others! the song ended, and the band exited the stage. now, i don't wanna offend anyone, so if i do, please let me know so i can change this! the whole of the crowd was pretty alternative, and there was me with my bright yellow jumper, sticking out in the sea of black haha! at every other gig or concert i have been to, everyone starts shouting for an encore/one more song, but no one did anything. it was like it was over. idk if that happens at all "alternative" themed things, and although everyone seemed friendly, i just felt no one was very excited haha! after a few minutes, the band came back on stage to end with the song 'no mercy', one of the others i know the chorus too! it was brilliant to sing the words along with my cousin and the rest of the crowd! the band left, the room's lights came on, and queen started playing. a strange moment of hush and freddie mercury. we left the impressive venue, walked to the station, i bought some cheese and onion rolls from sainsburys, ate them, and got the train back to my cousins. overall, the night was so much fun, a little cold at times, but you can't let the weather ruin something! i would definitely want to see each of the performers again, as each were so different yet complimented each other really lovingly! i hope i can review other shows and films and things again in the future as i have really enjoyed this! oh wait, i am seeing the new murder on the orient express film tonight so i may talk about that, maybe not, who knows, i sure don't. until next time future anna x