Don't Hang up on Imagine Dragons

Ay up future anna! I really enjoyed writing about my time at the pvris gig late last year, so i thought i would do it again! Yesterday, my friend Charlotte, her friend Jodie, and I travelled to the Genting Arena in Birmingham to see Imagine Dragons! Truthfully, i am a fan of the band! I have followed their progress over the past few years, and know the choruses to their biggest songs. But I know hardly anything about them. I know like every single person in the band is called Dan, and i discovered when they were talking during the show that they're from Vegas! But other than that, i was kinda going to the show blind. I knew they would be great, but wow. They blew my socks off.

So after eating mini eggs, waiting in the queue, smuggling mini eggs in my pockets, and standing in the arena for a while, the band's support came onto the stage! K. Flay, who i hadn't heard of until i saw her banner, was completely and utterly wicked! Her smokey and crisp voice (not to everyone's taste, but i was obsessed) was perfectly paired with incredible rock notes from the band behind her. She filled the stage, which is hard to do, and had the audience around me captivated. She truly did warm up the crowd and get us excited. One thing i really loved was how the lighting matched her music, which created an exciting atmosphere that i couldn't help but dance along to. Her vibe was something i really would love to experience again, and she has been added to my spotify playlist, no doubt about it! 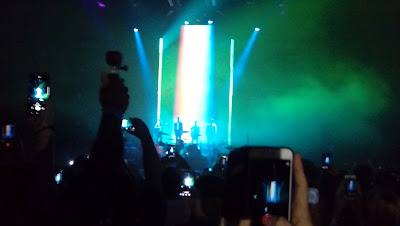 In front of a rainbow banner, matching their most recent album cover, Imagine Dragons were presented to us. The crowd were electrified, and as they stood taking in what was in front of them, i looked around me and saw so many smiles and excited faces. It was so lovely to be surrounded by so much love. My band is Bastille, and whenever i see them, well, i can't even explain how happy it makes me. It was lovely to know that the people around me who loved the guys on the stage just meters from where we were stood were filled with so much joy. Music is powerful.

Dan Reynolds, the main singer, took his place on the front of the stage and they began with I Don't Know Why.

After it finished, he started talking about America. Who isn't? But it's so great to see people who have a platform, use it. For good. He said it's time for change. It's time for love. It's time for acceptance. Then the familiar beat of their song It's Time began, and i don't think i have ever felt as united with complete strangers, singing a song i kinda knew, then at that moment. 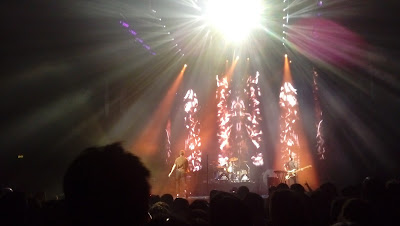 Can we please just take a moment to appreciate the visuals of this show? The amount of time and effort that goes into creating all the visual displays you see at shows like this take so much time and thought, but everything was executed perfectly. Each song was illuminated through new visuals and lights, really bringing to life the band and their song's capabilities. I hadn't really listened to their song Gold before, but after seeing it performed and bought to life in front of me, it has been added to my playlist.

Whilst we're on visuals, can we also just take a minute to thank the team who cleans the venue after it's use because oh my word they released confetti like every other song and massive balloons. I was living for all the colour and shoved so much in my bag, but props to the guys who have to clean that up haha!!

The stage had a tiny catwalk off the front, yeah, i was gonna make that sound all fancy, but it does what it says on the tin. It was a lil stage area off the bigger stage area. The end.

Dan, the main singer, not the other dan's, spent most of the show on this performance area, unless he was playing the drums, and i think he might have played the keyboard at one point but i can't remember. He interacted with the fans around him, and the smile on his face when the crowd sung back the words he had written or a song had finished made me so proud. The music industry is difficult to navigate, but this band seem to have mastered it. He knew his dreams had come true, which is so inspiring. Credit where credit's due though, dan did give the others a chance to rock this small area that was projected into the crowd, and let me tell you they ROCKED IT! Like i said, i don't know all their songs, so cannot say the exact ones the guitarists had solos in, but when their time came, they shone. It's always lovely to see a whole band shown and celebrated, not just lead performers from the group. I don't know who it was, but one of the guitarists had an awesome blazer and a sparkly guitar so if he wants to share his wardrobe tips with me one time i would be so down for that!

I entered the venue not really knowing who made up the band, but left hoping they are all so happy with where they are. They are genuine, lovely people, who have awesome music and skills which they are not putting to waste. 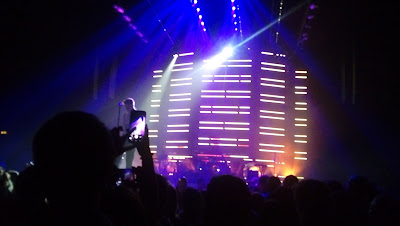 Each and every show has the slow section with the really meaningful tracks, and this show was no different. This isn't hate btw, these sections are normally my favourite part of the show.

Dan took a few minutes to talk about mental illness and how we need to look after each other. He went into detail and i could relate so i actually though i was gonna cry, but i didn't. He nearly had me though hahah! They sang their song Demons and i listened to it in a whole new light. Wow. It's so difficult to capture feelings, but they've done that. Each of their songs holds a different emotion, to them and to each listener. It was magical being able to relate and not feel alone.

A little later in the show, the band moved to a smaller stage by the tech desk, and performed a few slowed down versions of their songs. One of my favourite songs of theirs is I Bet My Life, and the way they offered it from this smaller stage was so precious and united the audience in a major way even though they had played it down quite a lot. I loved it. 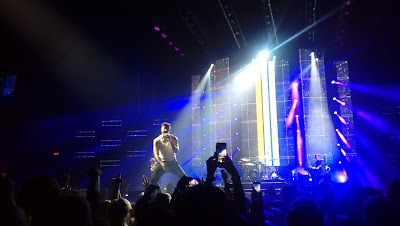 To finish the show, they of course had to play Thunder and Believer. Everyone came to life, listening to these fan favourites, and i don't think anyone in the seating areas were still sat down by this point. I love these 2 tracks, so to hear them live was incredible. Of course confetti, lighting and smoke bought these songs to life, but the band were so captivating, you couldn't help but focus on them perform their art pieces live. https://www.instagram.com/p/BfmbC7SlEB7/?taken-by=spacegiraffe_

The band reentered the stage, all beaming from the performances they had just given. They performed Walking The Wire, and just when we thought they were done, familiar notes started playing and the crowd were screaming as Radioactive began. The song that had made them famous was known by every person in that room, even me. Every word.

The crowd and the band all sang together. An incredible moment shared by everyone.

The band stood together and bowed as one as the audience cheered. They waved and left the stage. It was over. I hope i get to see them perform again one day.

Charlotte, Jodie and I stood to take in what had just happened. Our ears ringing, our minds blown, and my everyday playlist would be growing by quite a few songs, as well as my cd collection. Imagine Dragons, K. Flay, you're incredible. Thank you. Never stop creating, doing what you love, and using the platforms you have for good. That kinda rhymes.

So my first gig of the year went off with a BANG! Imagine Dragons truly made me feel like i was on top of the world, ayyyyyyy! Cannot wait for the other concerts i have coming up! Enjoy them future anna :)