alright future anna! in about 30 minutes i am leaving to go to liverpool so i can see katy perry there tomorrow, and last saturday i went to see haim! i love haim so much and was so happy when my friend hollie said that she could get tickets! anyway, here is my lil review...

So after walking to Ally Pally (yeah walking up that hill), getting into the venue, buying a Pepsi and finding a spot in the great hall, Maggie Rogers, the support act came onto the stage. To be completely honest, i didn't know who the support act was going to be for the show until we arrived and we saw a few of her products at the merch stand. I didn't know any of her songs as her name didn't ring a bell but was excited to hear her stuff. LOVE going to support the support! Anyway, she began her set and i thought she was wicked! She had this energy about her that bought the songs she sang to life. I adored the use of lighting and how it flowed with each beat of the drum and the changing rhythm of the songs. You could tell she put her all into each performance because she was so out of breath when talking to the audience between each song. About 2 thirds of the way through, she introduced a song, explaining that it was all about equality and that tonight was a safe space, that there would be no hate, and so much girl power. I loved her for standing up for her truths and what she believes in, not backing down or staying shy about it. Added a few of her songs to my playlists so i am excited to hear more of her in the future!

Between Maggie and Haim, I went to get some chips and my friend Hollie, who i had gone with, got a waffle. It was a great mini feast.

When we had finished eating we headed a little closer into the crowd and waited for the lights to go down.

Red smoke started to fill the stage and the crowd awoke, screaming with excitement. Each Haim sister separately walked on the stage, ending in a bright white spotlight. Danielle began playing the drums, Alana and Este then joined her. Together they created an unmistakable sound which made the people throughout the building go wild. Wow.

The drums stopped, the lights dropped, and the spotlights behind the sisters began to flicker. The girls picked up their instruments and went straight into playing Falling. The words echoed throughout the crowd with people screaming and shouting along, not letting any care in the world stop them from dancing. It was magical to be part of. 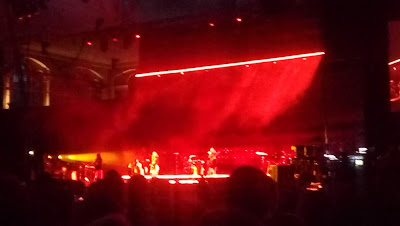 One of the next songs they played was Don't Save Me which is one of the first Haim songs i ever heard. The room was flooded with blue light, and no one seemed to stop moving for the whole evening. Danielle pointed to the crowd to sing with iconic line 'So baby, don't save me' with her which was an absolute dream. The girls couldn't seem to stop smiling, completely amazed that they had achieved this success, apart from Este who stayed in bass face mode for most of the evening which was incredible to see in person.

The setlist then led us to Little Of Your Love which is an absolute BOP. 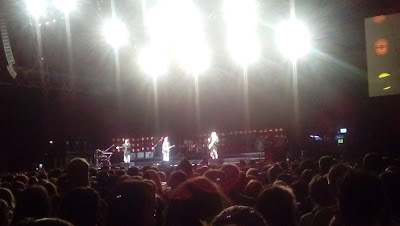 In between these songs, Alana seemed to take the lead in talking to the audience whether it was her just staying how "fucking grateful" she was to be there or give the audience a twirl to show off her outfit which made her feel like Rihanna.

One of my favourite chatty sections and probably the most iconic from the night was when they were chatting just before playing Want You Back. Alana began by saying how this song was her idea and that her 2 sisters didn't like it, but she put her baby foot down and made it happen. Este wasn't happy with this, and said Haim would be nothing without her older sister guidance. Finally Danielle stood up and said that she was the one in charge because she was the middle sister. It was so lovely to see their sister bond and that they were completely making the most of their tour being called The Sister Sister Sister Tour. The crowd went insane when Want You Back started and i think each person in that building knew all the words. Each person around me was having the time of their life and i was living for it! 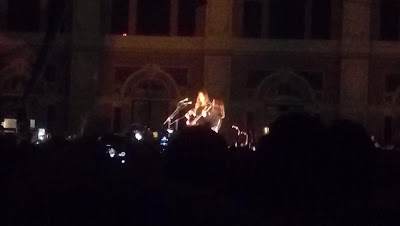 The setlist then slowed down, and to highlight this, they moved to a smaller, more intimate stage and hollie said that now would possibly be a good time to move to the back so that we could see better, but then i had a great idea... how about me move towards the front? because everyone had moved to the smaller stage, we were able to get to the barrier. WHAT THE ACTUAL HECK?!?! We were so happy, and ready to dance when the sisters went back to the main stage.


Alana came down to the crowd for one song and i just couldn't believe how close we were. what an actual dream hey! 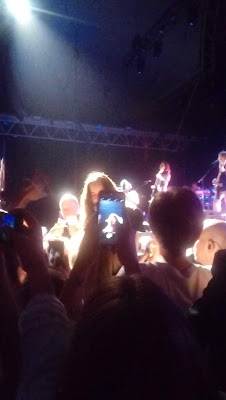 The sisters finished their song and gathered around the drums at the back, finishing their show just as they had started. Again, the drum beats were unforgettable and couldn't be mistaken for anyone else. You could see and hear the passion in the playing and i didn't want it to end. The final hit, the light brightened. The Haim sisters gathered to the front of the stage to bow to the sold-out room. It was over. 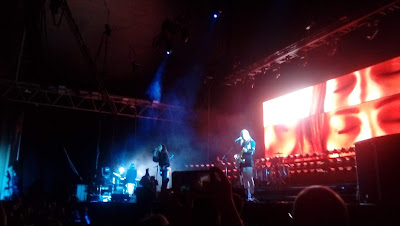 I fell in love with the idea of the Sister Sister Sister tour as soon as they announced it and was so happy i was able to go. No one wanted to leave after the confetti had finished falling so everyone stayed and danced. It was a wonderful, uniting feeling. We were all leaving a strangers, but we had all been equal friends for just a short while. 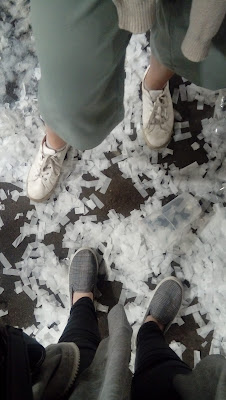 Wow future anna if you get to see Haim again PLEASE GO! You will not regret it! It's now actually a lot later and i am in Liverpool rather than sat stressing on my bed at home about this post not going up earlier, but nevermind, there's always next time! Enjoy the Katy show in Liverpool future anna!