Omg it's 9:04 am as I write this and I'm not waking up on my kitchen floor. I'm waking up in bed, still amazed by the incredible Bastille launch event for their album Doom Days last night! In this blog post, I'm gonna describe the events and talk about my feelings, so if you're not really into Bastille, you may not enjoy, but I think it's cool to talk about!

So, there were 2 launch events which were exactly the same, just happening a few hours apart. I thought this was a fantastic idea because it meant that more fans could attend and be part of the album launch. It was kinda like a matinee and an evening show, and I went to the later one!

The venue, Studio 9294 was a super cool graffitied warehouse style thing, near Olympic Park! Before our show, we decided to explore there and then find the pop up shop that the band had tweeted about.
It turned out to be right next to the venue 😂 which was great! The lil pop up shop featured signed copies of the album (I pick up a CD), t-shirts, denim jackets, pin badges and posters! To be honest, I wasn't really keen on the poster and t-shirt made specifically for the launch event (it wasn't pretty) but I bought another t-shirt that had a super cool design which I liked and a matching pin badge. For the 3 items, it came to £35 which I didn't think was bad at all. I thought it was really cool how they had paper bags printed with the album logo and my bag actually stayed intact during the show which I was pleased about 😂

The first show started at 6pm, and we arrived to the venue about 6:15, so saw people entering. This gave us time to look in the lil shop, and then we were allowed to queue. You didn't really have to queue, but we were there so it seemed silly not to. By being near the front too, we could hear what was happening and know where we needed to stand to get a good spot at the actual performance!

At 8:45pm, we were allowed into the venue with a headset! There were 3 different channels that we could tune into. One played frog noises, another played jazz and the final channel played 90s club music. The wide open space featured a bed, a sofa and a few other little props dotted around.

After listening to what people had said in the queue, we would move to another room to listen to the band after the interactive experience! I may have pretended to go to the toilet to scope out the venue.
So, I found where they were gonna perform, got a free lollypop, chilled in the toilet for 2 secs and then returned and the security guard was none the wiser😂 I felt a bit cheeky but you gotta do what you gotta do!

I then put on my headphones and had a little boogie as I met with friends!

At 9:15pm ish, the room went dark and on 2 projector screens, the boys from Bastille appeared to explain the headphones and what would be happening. It was cute and funny and I hope they release the videos because everyone needs to experience how funny they are!!

Three actors then took their turns to present us with a short monologue to introduce themselves. First a junior doctor told us how he was addicted to drugs although he assured us that he wasn't. Then a lady obsessed with cleaning told us a little bit about her sex life. Finally a man introduced us to his life and how he was living it after a bad army experience. The boys then reappeared on the projection screens telling us to choose a channel to listen to a particular story. You could easily flick through them to listen to a bit of each but I decided to stay on one to get the full story! I was gonna pick the green channel which would look at the army story and PTSD. But I decided to choose the lady and her sexy story instead as I could see her from where I was stood. Whilst the stories unfolded, time ticked towards day on the projection screens, monologues were told, birthday cakes were bought through and it was really cool. At points the stories over lapped, the characters changed places and we could hear all the actors, not just our chosen ones. It was such a cool concept, I'm down for more stuff like this in the future!! 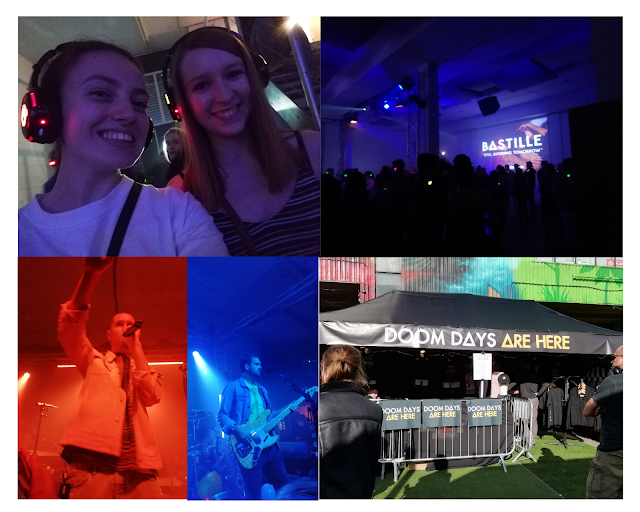 When the stories were finished, we moved through to the other room and WE GOT SECOND ROW! Not bad! We wanted front but Dan was VERY close in certain areas so it was nice to not be front😂
The band played their while new album, all live on YouTube which I will link to here: https://youtu.be/mFz2-DVPNQ0

It was so cool to hear the album played on the day it came out, even though I didn't know many of the words and Dan only looked at me when I didn't know them😂 It was the best time and I feel so lucky that we were that close! It will probably never happen again so I'm glad it did on such a small scale!
The show ended about 11, and we got the train back! Wow, what a night!

I'm excited to see how the Club Nights Tour plays out as well as the actual tour! If you wanna see them, I hope that you can get tickets and enjoy! I feel so lucky that I was able to go to this, it truly was a cool experience!