omg future anna I can't believe that bastille's 3rd album is finally here! when they first said that it'd be a concept album, I was very intrigued. When they said that the album would follow a night, I was worried that there wouldn't be enough time to frame these songs well and really tell a good story. The singles for the album have been amazing, so hopefully the rest of the album is good too! 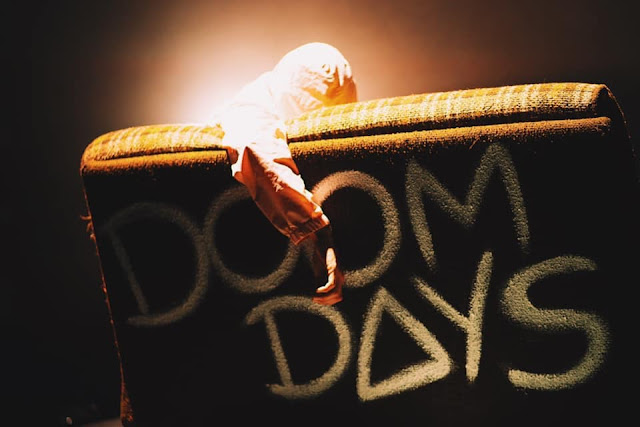 I am writing my thoughts for each song as I hear it for the first time, however I have already heard QPM, Doom Days, Those Nights and Joy.

omg I love QPM. We were given this song a year ago and have waited for something new ever since haha! Not even the band knew what was happening, but I'm glad we had this song to kinda fill a void til Doom Days was released and we all went mad! I love how electric and exciting this song is. It's truthful and I feel a fantastic place to open the album.

Clappity clap! ooooh it's so different from QPM, and I love it. It's kinda like a more upbeat version of Those Nights. I love the beat so so much, it's so bouncy and alive. I wanna get up and dance. It makes me laugh that bad decisions are being made this early on in the night/album! omg the bridge, yes dan show us your range!!!! I really like this song, I'm excited to see how much more of the album is cool and upbeat.

Ooh a nice transition there, oh hello there's still a cool beat but we're getting slightly more dreamy and slow. it's reminding me of the currents from the last album, it's not as punchy and powerful, but the idea of water and being swept away with it all. I like this tune, it's very different from anything I've heard them done but it's still so familiar and classic Bastille. I just love the claps hahaha.

oh, it's sad boy hours. it's slow and meaningful. this song really reminds me of World Gone Mad, which was released as a single for the film Bright, and it's a bit like a continuation for the story. The world is breaking but we shouldn't break down with it, we're stronger together. I don't think that this will be one of my faves from the album, but I like the calm of it.

ok we're back in a funky beat. yes it's like a cool club song ok I love the prechorus come on give us a good drop... oh yes ok! It's kinda tropical! I feel that it could've lasted longer (a possible dance break???) but I love the lyrics so I guess I'll forgive them. I really like this one, it reminds me of Grip which is a single from their previous mixtape and I really liked it! Yep, I like this tune!

YES I LOVE THIS ONE! When we finally had some news that a new single/the album was gonna come out, everyone was so excited. I think this song perfectly enraptures the current state of our world and what a lot of people think about it. The rap, the words, the beat, it's just wicked! I can't wait to hear this tune live! It's a complete banger. I love that it's kinda cute but also scary and realistic but lovely.

ok we're back to a slower pace but it's still got something to it. hmmm... someone guessed the name to this track a while ago so I was excited to hear it. It's slower than I imagined but I love the echo and repetition! I like this song, it's pop-y but not too energetic, which I'm drawn to. I think this will be one of my favourites on the album!

omg. this sounds so so different. oh wait I have heard this one on the last tour they did, hmmm I think it was the still avoiding tomorrow tour! I can remember hearing it live and not being sure about it. and now, hearing the studio version, I still feel the same. It's utterly beautiful and full and accepting, but there's just something I'm not keen on and I cannot put my finger on it. I'm sure it will grow on me. I don't think I'll listen to it much, but when they perform it live, it'll be the one I hold my friends to. It's gorgeous and so full of feeling, they've done well with this one. omg I love the harmony kinda backing bits of voices! if you can't hear it, stick both headphones in!!!

oh hello. Bastille have definitely been inspired by club music and sounds you'll hear from a dj set. I'm really digging it. this isn't the kind of music I normally listen to, but I love how they've put their own personal and precious spin on it. This album is way more electronic than their previous albums which makes me very excited to see how they perform it live. Considering they've not really done stuff like this before, it's really professional and a major step up from their previous stuff, although I may prefer that.

So this song is the most recent single from the album and I really like how it kind of sums up the album in this slow and dreamy way. It's calm and beautiful but also full of gritty truth that you eventually realise on nights like these. It's kinda sad, but also uplifting. a big jump from the previous songs. We're not alone, even if we feel like we are. I love the backing track for this song so much. Dan's voice always takes centre stage but I love the beat and use of instruments so much. This really is a gorgeous song. I get that this song won't be everybody's cup of tea, and took me a few listens to really like it, but it is worth the wait. The outro of this song really reminds me of their previous album, Wild World.

And here we are beautifully swept into Joy! I love this song and I love that it's being used as the main single but also confused me when I found out this was the chosen one. I thought that the final song on the album would be kept a secret, just so we wouldn't know how the night would wrap up, but we all know how the album ends, which I guess makes it familiar but will forever annoy me. It would've just been nice, in my opinion, to leave it til the album release to present it to the world. I love how alive this song is and the aspects of the choir and just everything about it! Definitely a summer song!


So that is the album Doom Days from my favourite band Bastille. It's exactly what I imagined and at the same time it's nothing like what I expected. I like how each song is very different and they don't go together, yet they all work as one body, telling a story. To be honest, I feel like I needed a song that was powerful, like Doom Days and just fantastic like Joy to really top off the album but I don't feel like we got that. I'm really happy with what we've been given after what seems like the longest wait, but I'm still not 100%. I'm sure the songs that I'm not sure about will grow on me and I'll know every word before too long! I'm super excited to see how the album is performed at the launch event which takes place in 20 hours, so I'd better get some sleep!

I think my fave is Nocturnal Creatures, but I also recommend, Bad Decisions, Doom Days, and Joy! Which songs do you like best from the album?

Cheers for the new album Bastille, we're all super excited about it and to see you all perform these new tracks live! Keep thinking outside the box and creating great music! Enjoy the launch event future anna!