ok I'm still like what the heck at all of this but on Saturday 15th June 2019, I did a Q&A with Lashana Lynch. I was asked if I could be part of the Fragments Connect day which was run on the last day of the Fragments Festival which had been held for the week at Genesis Cinema near Mile End! I have been to this cinema a few times for different film events, so I was super excited to be asked to come and do the q&a! I'll get into the day in a sec but for now, you're probably wondering how this came about.

To be completely honest, I still am to be honest! Hahah! Living in London, there are always so many different film and creative events happening and I try to go to all of them! Last year during the London Film Festival, the BFI run a day for young people who want to be in the film industry and during the networking drinks afterwards, I met Caroline from UNDR LNDN and we got chatting. We actually spent most of the drinks party together and we shared instagrams and that was that. I continued going to stuff, building a bit of a presence on instagram and just enjoying seeing lots of stuff! I do it for a hobby and I absolutely love it! A few weeks ago, I then got an email from Caroline, saying that a new festival was going to start this year called Fragments Film Festival. She said that she loved meeting me and seeing my personality grow so wanted me to be part of it somehow! I was super excited and kinda freaking out but calmly replied that I'd love to! A little later on, I got another email saying that I would be involved with the final day of the festival which would focus on connecting people in all parts of the industry, especially people who want to get into it AND I'D BE INTERVIEWING LASHANA LYNCH AND I JUST KINDA STOPPED AND REREAD THE EMAIL A FEW TIMES but yep, it was real. Caroline and I met again at another film thing I went to (funnily enough it was at Genesis Cinema) and she just said how I reminded her of her younger self, just wanting to get involved and throw herself into every opportunity! She said my personality was great and it was fantastic to see me supporting so much. I've been so lucky to have this incredible opportunity and my advice to you is to just get involved with everything you can and speak to people! Make friends, share contacts, support what people are doing... if you do it and enjoy it, people will see and approach you, like what happened to me! I understand it'd be harder if you didn't live somewhere where all this stuff happens, but that doesn't mean that you can't connect through social media or get your name/face out there in other ways!

So, I accepted and that was that! The theme of the q&a was 'Acting On Screen' so the week of the q&a, I started putting together some questions. I googled Lashana to find out more about her as well as watched interviews she had done so I could kinda get to know her! I knew that I didn't want to go into detail on Captain Marvel, Brie Larson or Bond 25, I wanted to get to know her, what acting means to her and how her advice could help people watching! I sent my list of questions to Caroline and she sent a few back and ready for Saturday, I had a list of 10 questions, in some sort of order! I know that it doesn't sound like many but I knew that more questions would come up as she answered the ones I had and I could add questions as I thought of them! For me, this worked really well and Lashana gave some great answers! Some of my questions were serious and others were quite playful! I really enjoyed myself and I think that balance of questions was nice as it made it quite chill and casual but still informative!

So I got to the cinema about 12:45, ready for things to kick off at 1! There were so many great people talking about what they did and how we could get there! I learnt some great things and got to speak to some lovely, talented people! I love days like this because you meet people at different points in their careers and learn so much and just feel so inspired! The q&a was going to be the final part of the day and it just went so so well! There aren't any videos of it, but I basically asked Lashana how she started acting, about auditions, her first time on a film set and how that was different to a big marvel set, about what she did to prepare for a day of acting, the differences between acting on stage and screen, how cameras and things could be distracting, and of course I had to ask her what her super power would be! It all just worked so well and I hope that the audience enjoyed it too! I was worried that no one would put their hand up to ask questions at the end but we had a few which was really nice so thank you if you asked something! 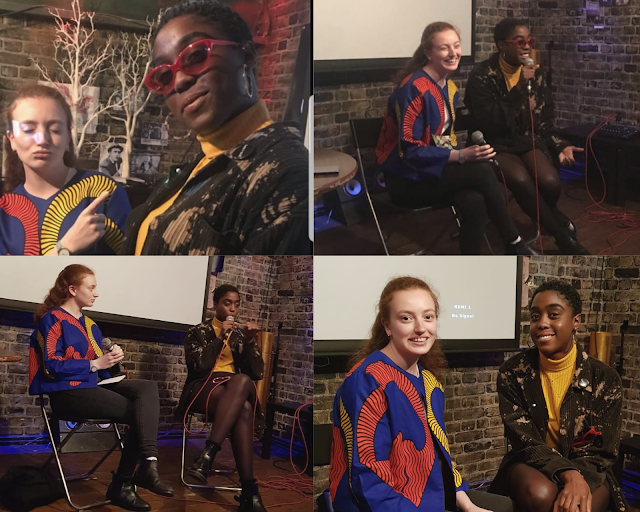 And that's that, my first q&a/interview thing and it went so well! Lashana was so so lovely and gave me a big hug! It was such an incredible experience and I want to wish her all the best with everything! It was so nice meeting her and chatting, I really learnt a lot!

So there we go! I'm now available for interviews of all kinds! hahah JOKES! But I am excited to see where this takes me and what I do next! we'll see ay, future anna!