Doctor Who's "Orphan 55" and The Future of Earth

yo, how's it hanging future anna? it's been a lovely day, and to finish it, we had a new episode of Doctor Who!

The rest of this blog post will contain spoilers to the Orphan 55 episode of Doctor Who which broadcast tonight, so you have been warned if you haven't seen it!

The Doctor and her pals win an all inclusive 2-week break at an alien spa. All seems to be fine until monsters start to attack. We learn that they are mutated humans, and the gang are on Earth, just a few years later, after people have stopped caring for the planet and wars have started.

It was a really powerful episode, with the unexpected twist really getting to us all! It really prompted me to want to talk about it.

First off, I think it's really great that large platforms are talking about and sharing stories about such big world issues like climate change. It's so important, and still after so much media attention, not everyone is doing what they can. It should be celebrated that such a mainstream show is talking about important things and getting points across to so many generations.

Next, Doctor Who was created to teach kids about science and history, and it's so cool that this series and the last one really did focus on that. The previous series' and Doctors have had complicated story lines and episodes, and no one can really follow them hahah! So it's nice that it's going back to its basics. It's nice to see simple episodes that do still have a meaning or allow us to learn about figures in history who are so important to the people we are today and the technology we have. To be able to learn about people, science and our planet is so cool. I know sometimes it isn't super realistic with aliens and all sorts chasing our favourite characters, but it is a great show that educates, entertains and brings us all together.

And finally, I know people won't like the episode. The characters (that lady who was gonna marry Benny was so annoying and bad lollll soz but not really) weren't super exciting, a few plot holes from old Doctor Who and the future of Earth (although the Doctor did say it was just one of many strands of the Earth's future), and the story felt a little rushed and not quite right, but overall, if it gets the message across that big things are happening, and we can be the change, then I'm all for it! 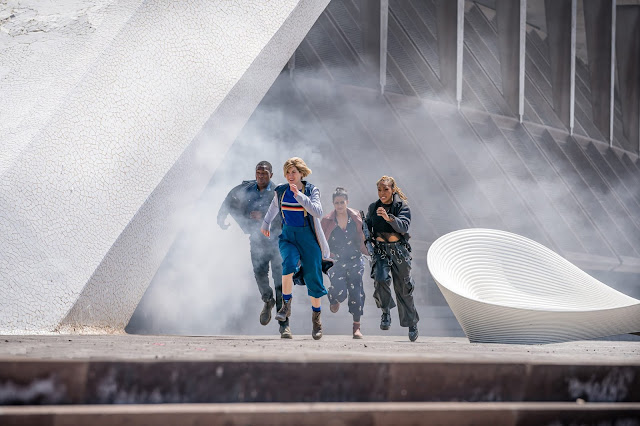 I feel so passionate about the future of our planet and what we're doing to affect it, so I was really surprised when this was the message of the episode and how glad I was that the message will be getting into more people's minds.

It isn't Doctor Who's job to educate us on topics like this, but when it does, I think rather than criticising the episode, we should be praising the writers that they want to push the message that climate change exists and we need to do something about it!

I love Jodie as the Doctor and I'm excited to see what happens in the rest of the series, especially after that explosive and excited first double bill episode! Hopefully more good messages like this! Enjoy future anna!