ok, so Taylor Swift's documentary, Miss Americana, is out and I've just watched it and wow, what a woman.

it's funny. my relationship with Taylor began as an odd one. I am a big fan of Katy Perry, and if you know anything of the 2 fandoms over the years, you'll know that Katycats and Swifties were fierce rivals a few years ago. In highschool, I would've given my life for Katy and wanted nothing to do with Taylor at all. I'd read stuff online about her and believe it.

It's crazy to think that now I'm a massive fan of her music, and her as a person. It was around the beginning of the Reputation era when I really began to respect her, and realise that drama like us fans had on twitter was literally so ridiculous. I am now completely and utterly in love with her, and kinda regret not falling sooner haha!

I think this documentary will be for some people, like the Reputation era was for me. A real wake up call to someone who is just trying her best to love and feel loved. Life is tough without the world throwing more at you, and if you're famous, you get a truckload more on top. People are people, whether they have multiplatinum selling albums or not.

So that's me, and where I stand on her. So when I heard that a documentary was coming out, I couldn't wait. I really love music biopics and documentaries (shout out to the Katy Perry one!!), which meant I couldn't wait for this one. I'd love to give my thoughts on it as a film, and also as a fan.

The following goes into depths on the film, so there will be spoilers! 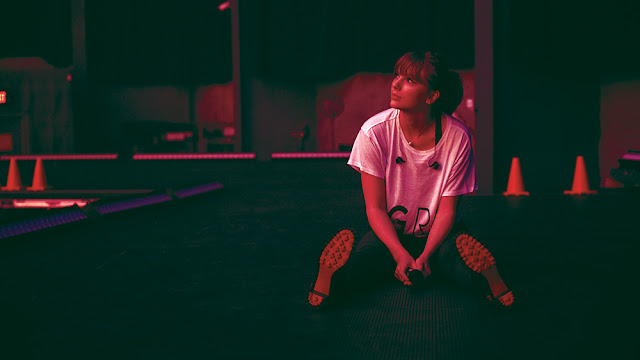 The film follows Taylor, from her receiving a guitar and penning her first songs, to performing on her most recent stadium tour. We see her surrounded by family, friends, band members, managers, music people, paparazzi, fans, haters, people who either adore the girl or hate her. Even though it seems like she's never alone, it appears that's exactly how she feels.

We learn of her aims for her career and the changes that took place to get there, and I really loved the style of seeing present day Taylor, happily chilled and talking about all these things, with archival and recent footage over, really letting us see how the world saw/sees Miss Americana, and how Taylor sees herself. I also loved how they paired this with the building of her 2 most recent albums, really showing us how Taylor is a storyteller, and uses her own story for inspiration.

I loved the layout and overall story of the film, letting us see Taylor grow in front of us. Building a documentary is a difficult thing, and to see the life of someone so full of tales and turns, to put it all together and organise it in such a way must've been tough, but it really is worth it.

It's crazy to think that all this has happened to such a young girl, who only recently turned 30. How someone's life can feel so good and exciting, yet it can be riddled with doubt and fear. Taylor is living her childhood dream, but we also discover how it can be her nightmare.

One of the main topics throughout the film is politics, and how Taylor felt that she couldn't share her opinions to fit the mould of what she felt was needed of her. There's a meeting with some managers and her dad, about whether she should post her thoughts, and after some tough words and thoughts, it's agreed that she will break her silence and speak up for what she believes in.

Following on from that, we really learn how being a woman in the music industry, and just in general really, can be a tough thing. Whether it's dating, building a business, or fighting for the truth, we're often belittled and told to pipe down which completely sucks. And even though Swift has been through a lot, it was so inspiring to see her challenge that through this documentary and her songs.

I loved the mix of handheld style, archival, and professional TV footage. It really helped us see Taylor from all angles and learn of her struggles and growth in many ways. It was cute to see the lil home videos, it really was. Whether old or new, to capture such wonderful moments really makes this film a treasure trove of love and creativity.

To begin with us seeing a grown Taylor, scanning through her childhood diaries, really looking at her thoughts and feelings over the past years all hidden away, to a Taylor who is confident and strong, really sharing her thoughts and what's important to her, really is quite something. It's fun to see this inspiring lady really become an inspiration to herself, wanting to continue pushing past the boundaries and keep her head above rocky waters. But hopefully with love and light from herself and those around her, she'll be able to stay happy, healthy and storytelling.

Miss Americana is on Netflix and rated a 15 in the UK. And is really really good.