My Thoughts on the Romance in Star Wars: The Rise of Skywalker

HOWEVER, when the lips of Rey and Kylo/Ben locked a shiver of disgust went up my spine.

First reaction: ughhhhh I hate romance and stuff in films like these. understandable that characters will start to like each other, but are you joking me!?!?!?! it was such a good and powerful moment and for me, it just completely ruined it. GET TO THE BATTLE, NOT THE KISSING!!!

A week-ish later: so, it seems that it wasn't just me annoyed by this scene. John Boyega, sweet sweet JB, also didn't like it. yay. it's caused quite a stir in how Boyega has tweeted and Reylo fans have reacted.

I'm completely on his side. if you have watched the previous films, and even this one, with Rey and Kylo in, you'll know that they have a connection through the force, but are constantly at war/confusion over it. Understandable that one is good and the other is bad, and there is a lil crossover with the dark and light side in both of them, but when push comes to shove, it appears that both characters aren't keen on each other, and Kylo is only kind when offering Rey a joint throne for the dark side. Understandably, the whole world (apart from Reylo fans, soz guys, not attacking, just giving my thoughts like you have been) was very confused when they went from hating each other to suddenly kissing.

Did I miss something? did I take a nap in the cinema? did they suddenly become bffs? Things in the story had changed, Kylo did morph (I don't think this is the right word but you get what I mean) back into Ben and they used their connection to fight the evil to help the light side win, BUT WHAT THE HECK THERE WAS NOTHING ELSE.

I liked the connection they had in the final moments. Throughout the films they were connected, they were soulmates in some ways, but at the end of the day, I feel that the kiss ruined the final moments for me personally. If I had done it, I would've kept it exactly the same, but instead of the kiss, I definitely would've had them hug in a friendly and accepting way of each other. They have forgiven each other and understood what has happened, and I think it would've been nicer than the kiss. 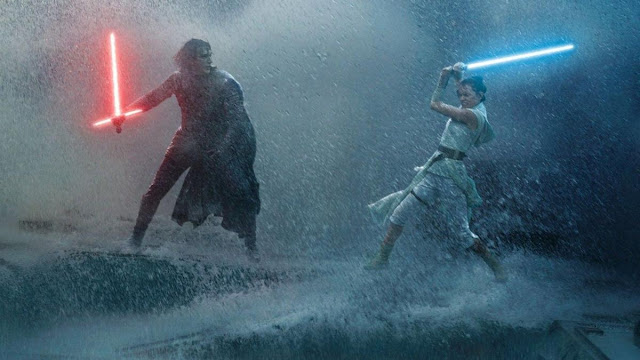 So those are my current thoughts on the romance. when I first saw it, it really did throw me off, but now as I think back, it should've done, and if not, I should be concerned that I see love as violence. "if he's mean to you sweetie, it means he loves you." mmmm hun, if he's mean to me, I'm gonna get rid of him.

J.J. Abrams has said that the kiss wasn't meant in a sexual way, just that they have a connection and that's what it led too. https://www.indiewire.com/2019/12/jj-abrams-rey-kylo-ren-star-wars-kiss-explained-1202199074/

Anyway, I feel I could talk about it for hours, and for lots of other films too, so I'll stop before it gets crazy, but these are my opinions and great to know that it isn't just me who feels this way, funny that it was one of the main characters in the saga.

Overall, The Rise of Skywalker was good. It was definately more for the fans than the critics, and it did make me realise that basically every Star Wars film is the same, but for a cute lil family tradition, it was nice to see, and I'm intrigued to see what they do with the Star Wars franchise next!

can't wait to see what riles you up next future anna!