hello future anna! how are you doing? so, a few weeks ago, I saw a trailer for the new Dracula short series on BBC and it looked so good that I knew I had to watch it when it came out. and here we are, watching it and freaking out and OMG-ing and just having a whale of a time with this gory yet brilliant show! I thought it'd be cool to give my thoughts on each episode in the 3 part series, along with a little synopsis! I'm writing my thoughts after seeing each episode, so it'll take a few days to finish, but I'm excited to watch this show as it looks so new and different! let's go! 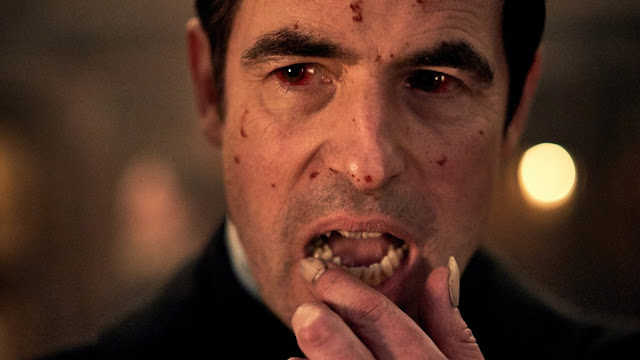 Episode 1: A lawyer goes to Count Dracula's castle in Transylvania as the Count needs to sign some papers for an Abbey he is buying in England. The Count says the Lawyer must stay for a few weeks, much to his dismay, however through this time he begins to learn the truth about Dracula, as well as begin to lose his soul as the Count absorbs it! We learn this story as the Lawyer (post knowing Dracula) explains it to 2 nuns at a convent. One is Agatha Van Helsing (The name of the well known vampire hunter/slayer) and the other is his wife who they have disguised. They discover he is undead/slightly bad, and must try and keep Dracula away to keep everyone safe, however Dracula is invited into the convent and causes chaos. We end on a cliffhanger, not knowing if Van Helsing and the Lawyer's wife will survive the attack.

Thoughts: I really liked this episode! If you know me or listen to the podcast, you'll know that I hate horror, and even though this was spooky, I really liked it! For me, it was the acting and makeup/prosthetics which really were amazing in this. Thewolf scene is just another lever *claps*. They really helped build a believable story filled with twists and turns that no one expected! It's such a clever and cool yet old school take on the story of Dracula. I don't know all the facts, and I've never read the book, but I thought it was such a cool tv episode. I knew as soon as I saw the trailer that I wanted to see it. It had moments of comedy, really tense parts where I was literally gripping the sofa with my legs up in case something wanted to grab me from under the sofa hahah! It genuinely was such a good show, and I hope the BBC do more like it! I'm so intrigued after this first episode to see what will happen next! Will we see Dracula in modern day? Will he go to England? Will the Lawyer who has a proper name that I can't remember be ok??? OMG!

I've googled the Lawyer's name and the history, and how cool that he is one of the first characters we meet in the Bram Stoker book!

I wanna talk more about the set. We welcome ourselves into this big, gothic castle, yet suddenly the only right option seems to leave. It's crazy that Jonathan, the Lawyer, wants to stay and help, but I guess that's him and I'd be OUTTA THERE! hahah! And of course we can't forget the costumes, and THAT cloak. It's gorgeous with red lining, and the shot when Dracula is carrying his undead Jonathan up the stairs is genuinely to die for. It's caring and warm yet unsafe and just perfectly sums up Dracula. And that shot from above where all the nuns are dead, glorious. And RIP, it was sad too. (but pretty)

Episode 2: Dracula is on his ay to England on a boat with 7 (I think it's 7, haha) other passengers. Whilst we see the story playing out on the water, we see Dracula telling the story to Agatha who is sat playing chess with him in the castle. Odd because it suggests he kept her alive after the previous day at the convent and the cliffhanger. It turns out Dracula "kissed" Agatha, so she now has the vampire's kiss and is slowly dying, like the Lawyer did in the previous episode. It also comes to light that Dracula is telling Agatha the story before they're on the boat, and she is one of the passengers on the boat. Back to the boat, people have started dying, and they suspect one of the passengers. It's a bit murder mystery which is fun, but there is a passenger who isn't allowed to be seen by anyone but the captain under strict instruction. Due to the murders, the passengers demand to know who is in the private cabin, and that's where we discover Agatha and she realises what has happened. Dracula frames her, she gets the others to see Dracula is truly the bad guy. Death, drama, and a few pages of the bible later, the boat explodes, leaving Agatha floating, possibly dead, in the water, and Dracula in his soil coffin. He bursts out, swims to shore, and suddenly he's surrounded by modern day police and Agatha in present day clothes.

Thoughts: Ok, so like I said in the lil synopsis, this episode was more of a murder mystery style one, but it still had the gore and the excitement of the first one, just slightly more toned down. I liked it, I feel I can cope with this horror now, and was sat on the edge of my seat, but not in fear, just wanting more! I wanted to work out what was happening, but I couldn't and that is what is so good about this show. I genuinely can't work out the twists and turns, and it's so shocking when the truth appears. Again, the makeup and prosthetics were phenomenal, and to add to that, the sets and costumes were exquisite! I'm a total sucker for things like that, so to see the detail in everything was amazing. The blood dripping through the boat, the mist around it, the candlelight, it was just so well done.

Also, the acting was so good like the previous episode. I love Dracula and I hate him. Claes Bang who plays him is truly on another level. I love his sassy-ness and his anger, and just his physical parts for the role too. Sacha Dhawan as the doctor, woah is he good or is he good! Seeing him in Doctor Who and then this really shows what an actor he is. I'm really excited to see more of him in the future, but his role in this short series has definitely become one of my favourites of his. And the actress who plays his daughter is so hauntingly beautiful in her own way. Wow, what a gal!

And I was right, we end up in modern day!!! That cliffhanger was so insane omg this show is just something else, and like nothing I've ever seen! I can't wait to see what happens next! Will Dracula be stopped? Is Van Helsing real? OMG!

Episode 3: In present day, Dracula is taken to the Jonathan Harker Institute, set up after Dracula let the Lawyer's wife, Mina, go free, and using her inheritance, she set up the place in her husband's name to learn about the vampire and how to stop him. Van Helsing turns out to be Agatha's great great niece or something, and takes some of Dracula's blood for research. Dracula is given an iPad (stupid thing to do) and gets a lawyer so he is released from the Institute. Van Helsing drinks Dracula's blood and connects more with Agatha. Dracula meets a young girl who is makes his bride. She gets killed. Dracula realises the things he thinks will kill him won't, and Van Helsing reveals to him that he is afraid of death. She is dying of cancer, and Dracula sucks her "poison" blood so he can die too.
Thoughts: So, after the last episodes cliff-hanger, I was confused as to what may happen next, so it was cool to see the next generations of the characters and what they had done whilst Dracula had been under the water. The story made sense and there was nothing off about it, but it didn't please me as much as the previous 2 episodes had. I did however love the way it was shot, and the use of neon lights and the slightly jittery editing to give it a modern yet still not 100% right vibe! It annoyed me how Dracula had been given an iPad, like ummm stupid mistake hahaha! But I don't know how he would've been able to continue the story otherwise, unless he was able to get into the heads of the guards or something.

The set and lighting really did made this episode special, especially at the end when we full enter Dracula's lil flat and the curtains open to reveal daylight. Was anyone else heavily satisfied when Dracula walked towards the window and the shadow of the window panes looked like the cross on him!! mmmm that's good stuff!

However, I was heavily freaked out, thinking about people not being dead when they're buried or burnt and I did not like that little boy who wanted to play EW NO THANKS!!! But again, big shoutout to the makeup department for creating the undead bodies, like wow. That is TALENT and I'm so glad this show has given them a chance to shine! Also, how much time did it take to get the fake blood out of clothes. props to you guys!

I think it's the kind of show that if you've read the Dracula books and are a big fan, you'll get all the references and know what it all means and squeal in delight at it all (especially the sun image at the very end which confused my mum a heck of a lot haha), however as someone who only knows small facts about vampires (like garlic is not good, but it didn't mention it in the show so who knows!) and not much about the main man Dracula himself, me and my parents really did enjoy the show and how it was something new and fresh, like we'd never seen before.
I think my favourite was the 1st episode, and then the 2nd and 3rd, but I think the script writers did a fantastic job in presenting a horror icon to a new audience! I'm a scaredy-cat, but really loved this, and would recommend it! It is 3 episodes, each lasting an hour and a half, but I'm glad they did that as it gave each chapter time to really come into it's own and not rush the story. Obviously Dracula doesn't survive the show (we assume), but it'll be interesting to see if they do anything more with this series, or other horror icons in the future! I just think the whole thing was really clever, and I really hope the BBC keeps things fierce and fresh with shows as exciting as this!

Are you watching anymore spooky thing future anna? If so, I hope you're sleeping ok hahaha!