I don't know what I wanna do when I grow up. Does anyone? Maybe you've figured it out future anna?

I love film and writing and directing and acting and creating, but I also love fashion and costumes and sewing and designing. To share my love of costumes, I thought I'd share a few of my faves. I feel costumes and the art department in films often get overlooked. Things are chosen for a reason, not just because the colours go or it was in the wardrobe. I wanna share my love and appreciation for them, so I hope you enjoy!

This blog post may contain spoilers, just as I describe the outfits and their location in the films/the reasons behind why they were chosen. Just so you know!


Elle Woods, Legally Blonde (some information found on EW, from an interview with Sophie de Rakoff)

Ok, we can't start this until we talk about the fact that Reese Witherspoon (who played Elle), had in her contract, that she would be able to keep ALL of her costumes. including the shoes. 77 pairs of Jimmy Choos! WHAT!! A!! DREAM!! I recommend that if you are in something, and you are loving your costumes, and you can have this written into your contract, that you SHOULD omg!

The costumes in the film were designed by Sophie de Rakoff, and from what I've read, they visited sororities to find the perfect colour and style. Pink wasn't the first choice, thinking it might be too on the nose. Pastel purples and blues were discussed but I think we can all agree, pink being chosen created a moment in history. Not just for the film, but for girls and people who identify as female. Liking the colour pink can be seen as too girly and feminine, but I love how Elle owns this, teaching us girls that it's ok to be who we wanna be, in whatever we wanna wear.

My favourite look from the whole film is the dress Elle wears at the end of the film, when she is the lead lawyer on the case and can fully be herself. 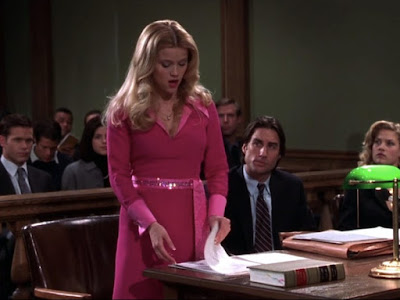 In a fully pink dress with sparkly belt, Elle stands sophisticated in the courtroom, yet keeps true to herself. Her journey to wear the film ends has been a tough one, and one that hasn't always been on her side because of her gender and her loves in life. I love the cuffs on the sleeves and the collar, how she looks put together and just great. We've seen her costumes go on her journey with her, from girly patterns and cuts, to an iconic bunny outfit, to this. She is intelligent and has grown, ready to take on the world, the pink still as hot as ever!

Plus a shoutout to all the other costumes in the show. They're fab and as exciting as the characters. A special mention to these looks...


Rachel Chu, Crazy Rich Asians (some information found on A Cup Of Jo, from an interview with Mary E. Vogt)

Crazy Rich Asians fills me with as much joy as the characters have in the dressing up scene! This film is just an explosion of colour, sparkle, and beauty, with each character having their own lavish style.

The costumes were designed by Mary E. Vogt, who said that in a drama film, you'd be quite subtle with the costumes and the colours, but in something as colourful as this, being dramatic is the best way forward. I find it really cool how much detail was put into creating each families distinct look, from costume jewellery to couture. Even including the culture and having Nick's family wear colours that you'd see in old Chinese paintings.

Picking a favourite outfit for most films is easy. There's normally a standout look that is iconic, but with this film, every character and the outfit they wear is absolutely cheddar gorge!!!! One of my favourite characters is Peik Lin (played by the incredible Awkwafina) with her OTT style and loving friendship. My favourite outfit is something that she lends Rachel for the first time she meets her soon to be in-laws. It's a beautiful rainbow-striped evening gown from Missoni which is classy yet has a bit of spark to it. Every time I see it in the film, I fall in love with it just a lil bit more!

Princess Ann, Roman Holiday (some information found on Huffington Post, from an interview with Edith Head)

I think all of Audrey Hepburn's costumes in films are my favourites! One day I might do a full thing dedicated to them, but for now, we'll stick with her in Roman Holiday, her first starring role. This whole film is beautiful, from the story to the whole thing being filmed in Rome, it's such a lovely thing that I think anyone would enjoy. 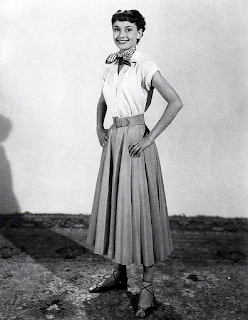 The films iconic costumes were designed by the even more iconic Edith Head, who won 8 Academy Awards for Costume Design throughout her career. She wanted to create a casual look for the big day out, compared to the incredible princess gown. Yet I think it's fantastic that the informal outfit still has a gorgeous princess figure, following a similar colour palette to the gown. But at the same time, it's the complete opposite. Her neck goes from being exposed to covered in a cute playful way, and now her arms are out too, with rolled sleeves, ready for a hot day in Rome. This is different from the long gloves that the princess royal is used to wearing.

Something this film does so well, is draw us into this fantasy with Princess Ann, living a what seems to be normal but actually very exciting day! 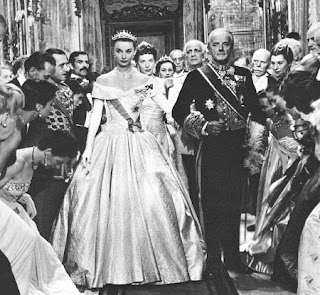 To start with a beautiful gown and end with it, beautifully wraps up the story. The princess will always be a princess, but that doesn't mean she can't have the day off to live some dreams and have some fun. Simplicity really is key with these costumes, putting the natural beauty of Audrey before anything else. I wanna go to Rome and ride a motorcycle with a neck scarf and then reveal I'm a princess and wear a big gown plz cheers and thanks.

Rose, Titanic (some information found on CR Fashion Book, from an interview with Deborah Lynn Scott)

We all know titanic. it's a historic event. an event in film history, and the costumes, well, they're just as special as rose and jack's love in my opinion.

Deborah Lynn Scott was the costume designer for the film, and even won an Oscar for her incredible work. The mix of vintage and handmade pieces really make the film feel authentic, especially with the differences between classes shown really well through the chosen outfits. Deborah and her team did so much research, seeing when gloves were worn, how many changes took place per day, and even how water would affect the fabrics.

when rose first enters the ship, she graces us with a smart dress suit and dramatic hat. The purple of it, along with the belt, is such a fabulous colouring choice. Its high end feel really emphasises the drama and richness. Being a redhead myself, I adore how her hair is tied back yet is an elegant pop of colour against the purple hat, compared to the monochrome outfit. Her style is so luxurious and you know she's headed straight to first class. 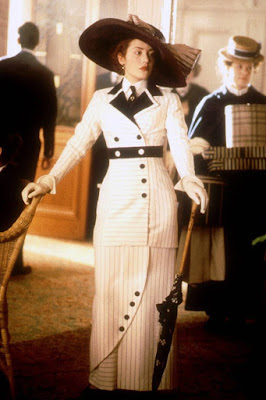 and of course we can't close off this section of my post without mentioning Rose's beaded ballgown, the dress she's wearing when her and jack first meet.

The beauty, and again, the colours showing luxury, but this time passion too. The detail and intricacy is stunning, and to discover that multiples were made for both Kate Winslet (who played Rose) and the stunt double is insane. how much talent is that! I appreciate it!! 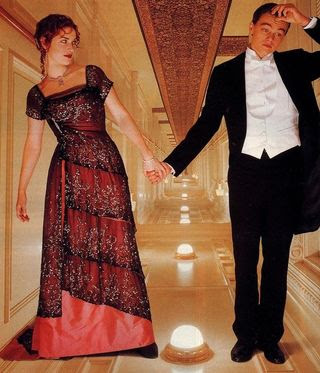 The Bride, Kill Bill (some information found on Variety)

And to finish the first blog post I'm writing about some of my favourite costumes from films, let me hit you with something that isn't a princess-y dress/outfit (I think they're my weakness).

Tarantino's Kill Bill 1&2 are filled with crazy characters who have costumes just as bright. An outfit that you probably think about whenever KB is mentioned is the sickkk yellow and black tracksuit that Uma Thurman (plays The Bride) wears when she's got just a samurai sword to protect her against a lot of people who are ready to attack. 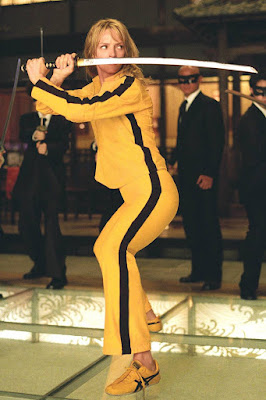 Catherine Marie Thomas (for the US) and Kumiko Ogawa (for Japan) shared the process of designing the costumes for the film, even taking inspiration from Tarantino's previous films, but for this yellow and black look, it was all new. Even with matching trainers, this look is one for the history books. After going through so much, to see The Bride in such a bright colour is great, but also fills us with fear, because surely it'd be better not to stand out. But in true style, Uma shows us just how incredible she is, as an actress, and kinda through a metaphor with this fantastic style. It must be tough to have 2 different people designing the outfits for a film that needs to fit together, but Cathering and Kumiko did so well with this one that it'll be remembered forever.

So, there are 5 of my all time favourite costumes in some films I also love! I hope to do more of these, because like I've said throughout this, I can't possibly choose just 1! Which is your favourite out of all of these?