How Beautiful is 'Normal People'!!!

hey future anna, this week you finished a new TV series, based on a book by Sally Rooney, called Normal People. Bloody hell wow what a show!

I'm not gonna go fully into each episode, but I feel I have so many thoughts that this is gonna be my place to jot them down and share! This post will be filled with spoilers, so it'll only make sense if you've seen it! Go and watch it if you've not already to give it the love and support it deserves, and then feel free to come back and read this! Up to you! 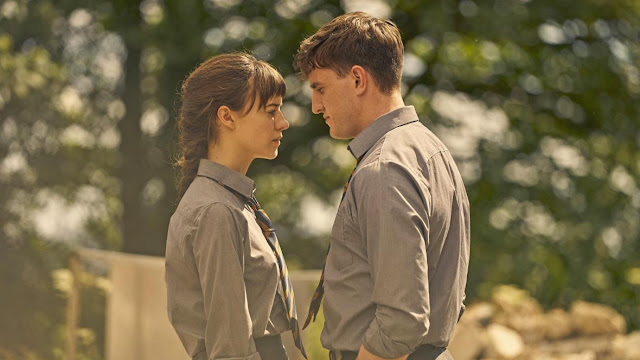 So you've had your warning, let it begin! I wanna start with the warnings the TV show gave and what it led to. I watched the show with my parents. Yes, it was slightly awkward at times, but I watch most things with my parents so it was also ok. I highly recommend seeing what the warnings are before you watch it with anybody!!!! There is lots of sex. hahahahaha.

So the sex. First off, wow to all the actors who partake in a sexy scene, because it must take a lot of courage and confidence to be able to let go of the privacy of your own body to let the whole world have access to it for the sake of a TV show. But I do feel that this TV show dealt with the scenes so respectfully, so incredibly beautifully. Because of this, the story behind each sexy moment was vulnerable and real. The way it treated sex, wasn't just a casual fling worth nothing, these moments were deep and we could truly see that what was happening was worth more than words to these characters. They could share their emotions with each other in a way I haven't seen done through TV or film before.

One of my absolute favourite things about the show was how it looked at consent. Connell was always so aware and loving, just how people should be in relationships. He never forced Marianne to do anything, even when she told him she'd do anything for him. He wanted her for her, not the persona she put on to live up to the sexual fantasies of her other relationships. Making sure people are 100% ok with what's happening is 110% needed in any situation, and I'm so glad we saw it portrayed so beautifully in this, for young people to see and learn from.

Ok, and my final point of the sex thing, hahaha... I just loved how Marianne wasn't shamed for having more than 1 sexual partner. Obviously her friends were intrigued about her life and what she was up to, but they never mentioned or put her down for her choices. I loved that. In real life and in media, girls are shamed for having sex, and boys are shamed for not having sex. I loved how this story told the realness and looked at boys having emotions and girls not feeling them. It really helped make it a beautiful, real look into this generations loves and lives. 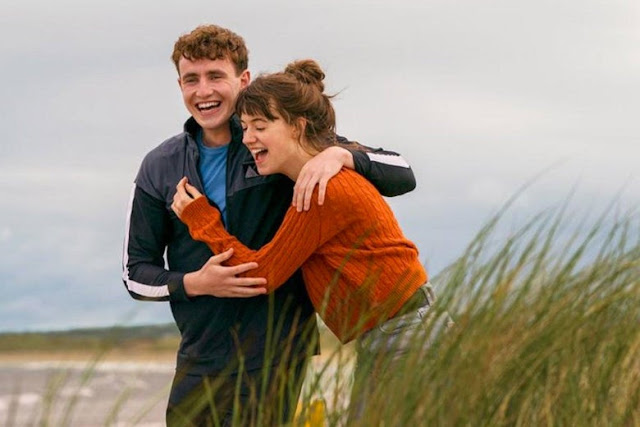 Next up, something I'm a complete sucker for... rhyming shots (I know this isn't the correct term but my brain can't think of it so that's what you're gonna get), where a character does something and then it happens again to show similarities or differences. In this case, the show used this a few times, to suggest how different people cope with situations, or to emphasise the moments of longing between Connell and Marianne. But my favourite one of these was later on in the series when Marianne is in Sweden and she is drinking in the kitchen, when she stands, pours her drink down the sink and then stands looking at it. She then goes to have a photoshoot with her boyfriend at the time, and is put into a situation she doesn't want to be in. She leaves and is left alone, possibly wanting to reach out to someone but she doesn't. In a later episode, Connell is sat in the kitchen drinking a beer, he then tips it down the sink and stands how Marianne did. His phone then rings and it is her, needing his help. I just thought this was so brilliant. The whole series is full of beautiful shots and scenes, but this mirroring really emphasises how important they are to each other. They're soulmates, and need each other, but don't always have the strength to reach out. It's so lovely to see a story being told through words and images, and not just relying on one or the other.

This show was artsy and so fab to look at, without being over the top. It really did it beautifully, and I really hope other productions take note. 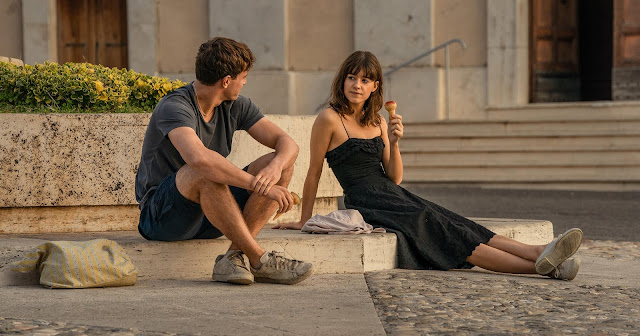 Ok, next is the soundtrack because omg those song choices. There were a few well known hits, but mostly there were unknown songs played, just like the story playing out in front of us. The songs chosen were so beautiful and as I listened they just instantly became favourites, and even classic sounding. Even if you watched the show and aren't really sure on it, I'd recommend giving the music another chance. People have made playlists on Spotify and things, and even the actors who played Marianne and Connell have released individual playlists based on their time on the show, so they really are wanting to make something that sticks with people, that is interacted with even outside of the screen you watched it on.

I just thought the soundtrack was so clever at times. I don't know the exact moment or song, but at some point (I think at one of the parties whilst they were first at uni), there was a song with lyrics something like: 'I don't love this, but I love you'. People can either highly appreciate the sound in films and shows or completely disregard it, but you have to agree that this show used music so cleverly. I might have to rewatch it all just to listen to it all again. 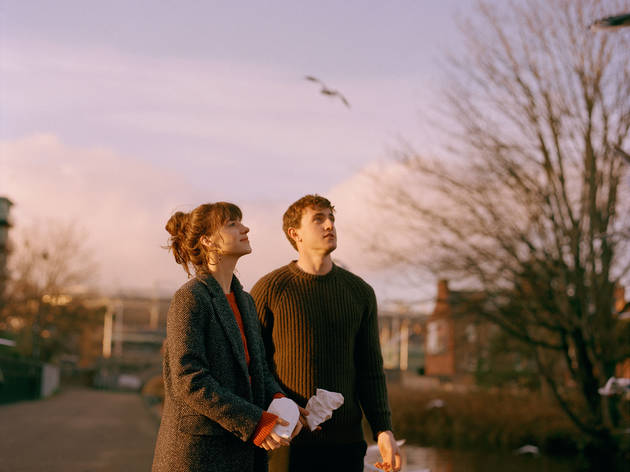 Something I have to bring up is the costumes. Predominantly, Marianne's wardrobe. I WANT IT PLEASE! Her hair at all times was beautiful, and what she wore was just so beautiful and classy, yet still suggested her childish-ness, and her unknowing-ness. Whilst she was at uni, I loved her red dress that she wore a few times when she had dinner parties and things (rich people at uni confuse me hahah). She was elegant and sophisticated, yet playful and sometimes dangerous, just like red is. Whilst she was in Italy, she met the boys in a super simple printed dress which again, is playful, but suits her at that time. She's innocent in all the badness of her relationship, and wants to be grownup, but it's just not working how she would like it to. We can begin to see her become a woman, thinking she knows what she wants when she moves to Sweden. She is in blouses and scarves and blazers, a look I wanna achieve. I just feel her whole look is so classic, yet so individual to everyone else we see on screen, without standing out for ridiculous reasons.

I also loved her accessories, but nothing can beat Connell's chain. omg. I've done some googling and it's apparently once mentioned in the book, so the costume designer, Lorna Mugan, thought it was important to have it in the show. Well, I send my thanks to her because phoarrr am I right or am I right? 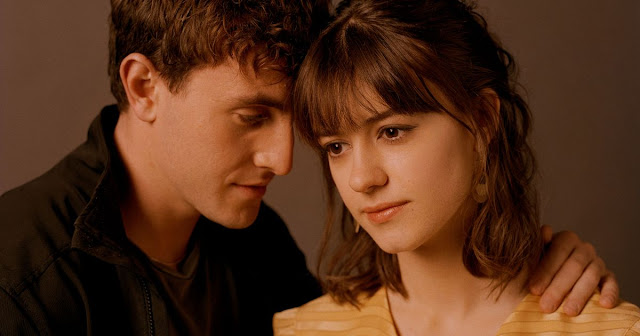 I had better start winding this up because it's getting long hahaha! To nearly finish, let's have a chat about the story. As you may have gathered, I haven't read the book, but I'll be sure to, just as everyone else probably will. Because of that, I can only comment on the show as a singular thing, rather than comparing it to the book. Just so ya know!

I thought that this story was incredible. It's so fresh and open, really inviting people to see the truth of relationships and friendships and love and family and growth. That's one thing this story did so so well, growing up is so tough, and to experience everything changing around you can affect that so much. This series did such an amazing job of showing a few important years of some important people, in such an important way.

To start, we meet 2 different people, 2 COMPLETELY different people who want something in life. Whether it's an escape, a friend, or someone to love them, these magical people find each other and from that moment, they know as well as we do that they're meant to be. The respect from day one is something we should all be, and all aim towards receiving and not expect anything less. Not all young boys crave wild sex. Not all young girls are scared of the idea. I loved that from the first moment, these normal people were so well shown. I hate the stereotypes, because they're not normal people, they're what society is telling us is.

Throughout, I love how these people separate but can also never be too far apart. It's real for friendships to drift and people to grow and change. It'd be odd for these characters to stay where they are, not doing different things.

To end with: "I'll go." "And I'll stay, and we'll be ok" wow, I CRIED! I know some people will be annoyed by that, but how can you end something that will never end? It's real, it's true, it's what happens. These people are normal, not living in a wild fairytale. To end it on that note, leaving the pair together, in one final embrace and share of smiles, is the perfect way to end it in my opinion.

I know I've glazed over a lot, but overall, this story really is one this generation, and I'm sure many others can relate to. Whether falling in love and it not being the right time, or fighting with family and needing escape, to not fitting in to uni and needing some guidance. Whether you see yourself as these characters or not, this is a story for all, something to see to know we're all normal, for wanting, craving and needing. And to actually end, we can't say goodbye before we mention the stars, Daisy Edgar-Jones who plays Marianne and Paul Mescal who plays Connell. What a pair to have found to play these fantastic characters. They were vulnerable, emotional, and if you didn't know of them before, the world has definitely fallen in love with them now. You can see they gave absolutely everything to these roles, to properly tell this stunning story in all its glory. I just cannot get over their performances, and if they don't get nominated/win things, I WILL BE MAD!

As you've probably guessed, I could talk about this show for years. It's so important. It's so needed. I'm so glad it's been made. Ok, I'm gonna go and read the book and rewatch the show and look at Connell's chain and fantasise over Marianne's wardrobe. Enjoy whatever you end up doing.

p.s. all pictures used in this blog post do not belong to me, I didn't take them, and I can remove them/will add credit if asked, I don't know who took them. :)
at 21:39