My Thoughts on SMILE by Katy Perry

hellooo!! if you know me, you know that I love Katy Perry. I'd always been aware of her music, but nearly 10 years ago I became a katycat, and supporting such a cool lady and her music has been the best ever since! I've seen her on tour 5 times (Witness the tour vlog: https://youtu.be/0nneUJn26ek), danced the night away to her music, and now I just can't believe her 5th studio album is here. My first full cycle era to be part of was for her album PRISM which is gorgeous, so for this to be my 3rd, well I'm pretty damn excited.

So, without anymore nonsense, let's get into her new album SMILE!!! I will be writing my thoughts down for each song as I listen to it, so it's normally best to know the album or listen to it at the same time!

yes what a fab way to dive into this album. we all know and love NRO so how cool to have it be part of SMILE! I'm glad small talk and a few other random singles from after Witness aren't part of it because I love new stuff, but I'm happy about this one and the others that we've heard before joining in! ugh I just love this tune so much, how it's quite cool and exciting yet means so much. I'm glad it's a fast, pop-y song and not slow, it really works. I'm literally shaking with excitement to hear the next song omg NEW KATY PERRY MUSIC!!

CRY ABOUT IT LATER

oh wow, I loveeee! "I'm ready for a shameless summer" omg girlll I imagined this song to be quite bubblegum pop, but it reminds me of a song from Selena Gomez's new album and I really like that album, OMG THE LINK TO THE ONE THAT GOT AWAY I could cry, yes girl be ready to get on with your life and worry about it later. THE ELECTRIC GUITAR ok this song is a proper mood and dance beat that I love. it's so fun and alive and inspires me to just go and get what I want and to worry later.

"wanna run like my mascara" oh ok as we dive into the chorus, it feels super cool and I can imagine this being remixed and played at the club. I really appreciate how these songs are all about feeling sad, but the songs feel so hopeful. I respect that katy acknowledges that we all go through sad times and sometimes just have to get on with life, and now we have a few soundtracks for days like that. cheers. this is a bop, I really love it. I cannot wait for my CD to arrive so I can be bopping in my car everywhere.

omg we all know and love daisies, and if you're a fan, you'll know that katy is selling signed singles of the song. I ordered one MONTHS ago, and we all wondered if the singles or her beautiful baby would arrive first. Well, yesterday we discovered the her baby, Daisy Dove Bloom, had entered the world. I want my single, but the news of her baby just made me so happy that I can forget for a while. This song doesn't have a different meaning now I don't think for me personally, but whenever I listen to it I'll be thinking of katy being a mum and just being so happy with where her life is and what she's gone through to get there.

oooh so this is a different kind of beat and style, but I can still imagine having a small dance to this. I love how katy's albums always have really strong songs that encourage and hold you when you feel small. this is one of those. "I'm in full bloom" omg I'm just so happy for her and this album makes me so happy!

NOT THE END OF THE WORLD

omg. omg. ok wow I frickin love this with my whole entire life. omg I just love the sound of this but looking into the lyrics you can see how katy might have felt her career was ending, but actually it can be the beginning of what she really wants to do with her life. "don't say goodbye" I ain't going anyway, don't worry. I really love this song so much. I think fans will appreciate the meaning of this song, I just think it's fab.

and how perfect to lead us to the title track of the album. I love this song so much and it's played on the radio loads which makes me heart soooo happy! I think this is so vibrant and exciting, it makes me want to smile so much, and I think the story of the album so far to lead to this has been so clever. I love that we've seen katy worry and try to hide her tears, but she's bounced back to being herself which is the most important thing.

omg that intro! this is such a cool party song where again, I can imagine remixes played at the club. I think this one looks at her relationship with Orlando which I really love seeing, to know they had hard moments, but all they have to worry about now are silly superficial "champagne problems" which they can fight together. "all we got" omg yes show your range baby!!!! Katy Perry is such an amazing singer and you can't deny it. I think this song is so cool!

this song sounds so different, I can imagine it being a single. oh wow I really love it. "they'll never know about us, as long as I keep up tucked" I wonder who she's talking about, a cheeky lil fantasy. I think this song feels more repetitive than the others. I love Taylor Swift and I love how her songs really progress and the lyrics change through the songs, and I'd love to see Katy do more of that, but she's mastered the pop song so I don't mind. The next song is the PERFECT example of that.

you just have to LOVE this song. I adore it! it's so summery and sexy and just utterly gorgeous. every time I hear it I am transported to Hawaii and on the beach and just having the best time. I think the vibes are just amazing, and the atmosphere this song creates is sickkk!

omg I could cry. I often feel my days are a waste, so to know someone I look up to feels the same is quite comforting. "give me only love" I just love this song and how it gets down to the basics, that all we need to live is love. I love how it mentions her parents, but I think it'll definitely pull heart strings of the people who may not have their parents here anymore. I'm gonna go and tell my mum and dad that I love them when I've finished writing this. I think this is beautiful.

WHAT MAKES A WOMAN

and the last song on the album. this was released a few days ago and I think it's fantastic. I love how it's so unapologetic and I think it's the best song to close the album. I think women in pop are constantly held against each other which makes me so angry, but this song says they're all doing fine, and however we choose to live, as long as we know who we are, it doesn't matter what anyone else thinks. "there it is, Katheryn" oh my gosh I am crying. as a fan, it was so hard to love the Witness era fully when we knew the whole time that Katy hated herself and the world around her. to know she's come full circle and feels happy again with who she is and what she does, to know she doesn't care about charts or anything, all she cares about is finding love and spreading it. I'm so glad to know she's found her smile, and to know she understands and loves her true self, well, there ain't nothing as special as that. 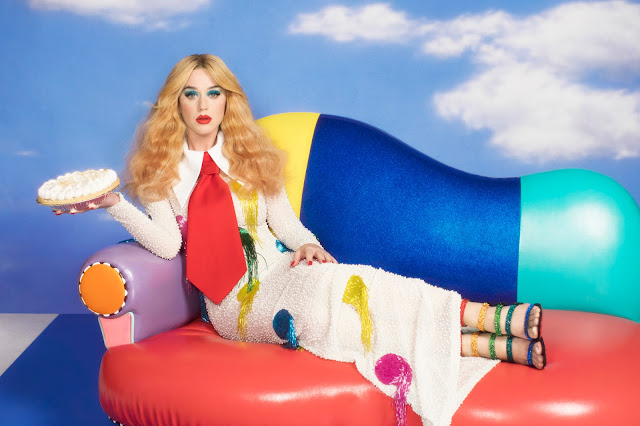 so those are my thoughts on Smile by Katy Perry. I really love this album. I was speaking to a friend recently and she was saying our bodies have natural rhythm and that is the reason why we often don't like songs, because we don't actually connect with them musically. I felt that I didn't gel with a lot of the Witness album, which is ok, but it made me sad to think maybe I'm not a fan anymore. well my whole body, heart and soul are totally into this album I am pleased to report. I just can't believe the album is out and we know Katheryn a little better.

If you want to listen to the album but don't have time for it all (it's only 36 minutes long, you've got time boo), here are my faves: Cry About It Later, Not The End Of The World, Harleys in Hawaii, Only Love and What Makes A Woman. Although I do love them all, and my faves will probably change every hour as I listen to it for the rest of the weekend.