My Thoughts On 'Babyteeth"

if you didn't know that a new film called babyteeth has come out, you might have thought I was a little weird after reading the title, haha! I thought I'd write down a few of my thoughts for the film as I really did love it. I won't be going into crazy detail, and it won't be as long as some of my reviews, but I wanted to chat about it a little bit, so here it is!

THE REST OF THIS POST WILL CONTAIN SPOILERS FOR THE FILM

This was the first film I saw in the cinemas post UK lockdown. I had to wear a mask the whole time, which I didn't mind because obviously it keeps people safe, but it was fantastic as it was able to soak up my tears! I cannot tell you how I welled up at the end and just exploded with sadness.

The film follows a young girl who is seriously ill and how she falls for a small-time drug dealer. Her parents disapprove, but she soon finds a new lust for life with this romance. I love the idea of this, the idea that we can do things that are parents aren't happy with, but to know their daughter's happiness is a big deal due to her life possibly coming to an end, it threw a spanner into the expected works. One of my ultimate favourite things though was that it was about a girl who had cancer, but it wasn't about cancer. It really annoys me when there's a new LGBT film or something about a topic we don't really see and the whole film focuses around that one point, as if to suggest the only thing in a gay persons life is the fact that they're gay. I'm so glad that this wasn't about cancer, like it was, but it wasn't. 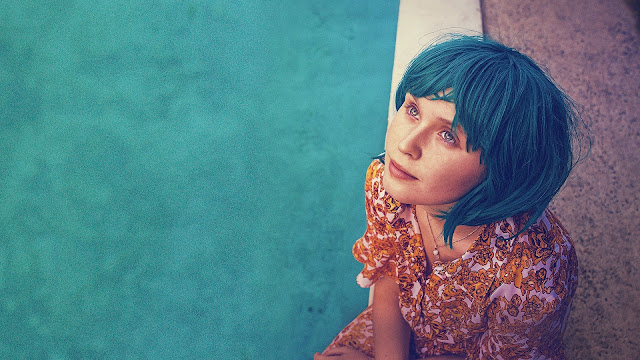 so after some research, I found out that the film was based on a play of the same name that came out a few years ago, and the writer also wrote the script for the film. They both seem to be very similar from research, where the scene from the end is the scene that also starts it, and other key plot points. I like that it's so similar and we can appreciate the original story but obviously spread to a wider audience around the world. I also appreciate that it was written and first shown in Australia, and it was filmed in Australia. I love when things stay home grown and we can see how the play was meant to be. I really wanna see it on stage now!

I really loved the actors in this. they all worked together so perfectly. Eliza Scanlen, omg can we just take a moment for you. and the wigs you wore (I want them). ooooh yes. I think Eliza did an incredible job portraying Milla. She was sweet and sensitive, yet raring to grow up and try the things she knew would never be able to happen. I really loved her in this role and want to watch it again because of her. One of my favourite things in the film was the simple moments when she looked at the camera. It reminded me of Fleabag and did make it feel like a perforce or play, which is obviously what it was based on. it made us feel one with Milla, like we were with her along this journey, but also like we were so disconnected from what was truly happening with her. Opposite her, we see Toby Wallace as Moses. I loved him and hated him. I think he was so good at playing this ride or die character who we were scared and worried about, but also in love with because Milla was.

and to finish this kinda review, let's talk about the tears. so at the end when Milla asks Moses to smother and then he doesn't but then she dies in her sleep and omg I was in TEARS! I thought we were at the end but no, we see a previous scene when Milla is chatting with her dad. They understand that Milla will and wants to die soon, and he'll have to promise to care for Moses. it had me crying so much. I was weeping into my mask, so luckily it was there to catch my tears. To see this girl go on this journey for a short time was really lovely, but then to realise that all good things must come to an end and we were about to see that, well it truly shattered my heart. to tell your dad that you're ready to die, and then to have to understand that as a father, I just have no clue how in real life people would have the strength to do that. I loved the moments through the film where Milla acted like a little kid around her parents, wanting cuddles and things. I'm exactly the same as it just makes you feel quite loved, and to see Milla go through the film as a young girl and pretend to be a cool party person, to someone who is so sure of what she wants, it really was incredible growth. It makes me well up just thinking about it.

I really loved this film. I want everyone to watch it, to know the story and love it as much as I do because it really deserves it.

so those were some of my thoughts on BABYTEETH! I hope I can see the play one day, but until then, I'll keep crying at the film and how good Eliza and Toby and the rest of the cast were because omg, I adore it.