Farewell Amor follows the reconnection of a family who were separated by war 17 years earlier. Sharing a tiny apartment in Brooklyn, they try to rebuild their lives together, giving us a glimpse into the experiences of New York’s African immigrant population.

The following contains spoilers for the film. 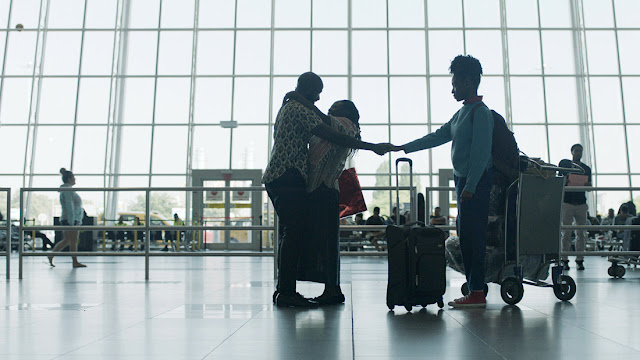 Meeting us at the airport arrivals gate is Walter (played by Ntare Guma Mbaho Mwine), presenting his wife and daughter flowers, even though he’s spent the last few years pretending to be single so that he can be allowed to love again. Ntare really does well in trying to gain our hearts and trust, just like he does with the characters in the film, especially during the first chapter. I think we feel for him, just as we feel for his wife. It must be so difficult to have your life turned upside down and then move away to help provide for them, especially when the place you’re going to is so totally different from where you came from. Brooklyn is vibrant and noisy, with an insane dance scene and new women each day. Of course, the character of Walter is tempted, wouldn’t we all be?

Starring opposite him is Zainab Jah, playing his wife Esther. Becoming a devout Christian whilst her husband has been away, Esther only wants the best for her family and has continued with her marital duties even whilst separated from the man she loves. I really liked how Zainab played the character, and you can begin to understand how real women must feel when they join their husbands in a new place. You can see how church is important and can provide a sense of home and community, when your own family doesn’t. To see Esther want to make things work really did break my heart when knowing Walter’s truth, but I wasn’t truly on her side until she was being searched for, and we could see how important she was to her daughter.

Taking control of the second chapter is Jayme Lawson who plays Sylvia. This young character bought a fun, teen romantic comedy edge to the film, something that may not have been explored if she didn’t exist. However, I’m really glad that a sweet light-heartedness bought a different vibe to the film, making sure that it wasn’t all doom and gloom. I really liked Jayme’s performance. I loved her style and excitement, especially with the dancing, but she could contrast that so well when in situations that worried her.

Written and directed by Ekwa Msangi, you can really see the care put into the story, really wanting to respect yet elevate the stories of families who are split up. We often hear of that bit, but not always the re-joining, so I’m glad we’re able to see something like that on our screens. Separating the story into 3 chapters really grabbed my attention, and fully made sure that we were able to hear each character’s side to the story. I loved the colours, but also the realness, that they’d have to use the living room as a bedroom (no one can just move into the penthouse suite!), and how their relationships and emotions would’ve been affected by their time away from each other. The warmth of the film was shown through the colours and hues, often making the sad moments still feel beautiful, really emphasising how important family is, and the places that we’re from.

This film made me upset and worried for the people shown, but it also made me want to get up and dance to appreciate the life and love I have, just like the characters in this story could appreciate also. Whether we have something or nothing, as long as we have people around us who love us, we’re richer than we think.