Two con artists have bought their daughter up to do the same, but things begin to change in their life when a stranger becomes involved. Kajillionaire looks into love and life, how our upbringing can really affect the person we’ll become. 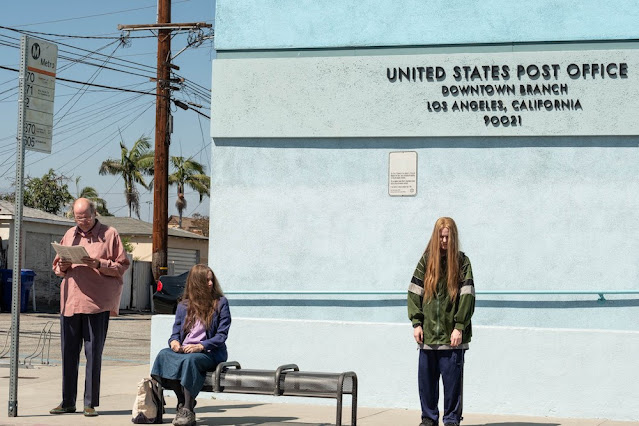 Starting with a boring suburban scene, when we’re thrown into the action and unsure on what to expect, the premise of the film becomes clear: we’re in for a confusing yet understandable ride. It took me a few moments to get into the film, unsure on the characters and their motives, but as I sat and enjoyed the beautiful colour palette, different landscapes and interesting characters, I started to fall in love with this film.

Evan Rachel Wood plays Old Dolio, the 26-year old daughter of two oddball characters, who have raised her to make money in any way she can. Whether catching falling bubbles from the wall or filling in as someone in a parenting class, Wood does an incredible job in capturing someone who the audience wants to love but won’t seem to let them. From her shoes to her hair (I wish mine was that long), we learn about the parent to child relationship, and how what you’re used to is fine, until it’s pointed out to be what it is: wrong.

Written and directed by Miranda July, she does well to create a story about family, as well as the state of America and how money really does make the world go around, but definitely in a way that won’t please everyone. I did enjoy the film and its quirks, but I don’t think I’d describe it as a comedy, although some people may see it as one. It felt melancholic and like a work of art, but at the same time it looked at fear, and failure too in a way that I don’t think I’ve seen on my screen before. This film plays on unhealthy parent dynamics, something I feel a lot of people can relate too, which may help or hinder your appreciation of this film, but for me, what made it special was the new approach. It wasn’t the boring, typical bad parents film and the kid is left on their own, instead it added the idea of a heist and excitement, something that people want in their lives, but not like this.

When Old Dolio thinks up an idea to make some quick cash, her parents stir away from the plan and begin to involve Melanie in their lives. Played by Gina Rodriguez, for me, she was my favourite character in the film. She still felt odd like the others, but also bought a normal view to the film, helping us and the characters see their lives from a different perspective and how it wasn’t going to work. I think to include a character like her was a great idea, and I think the story would’ve been boring without her appearance.

I think this is a film that you’ll appreciate for the art and story or will dismiss and feel like you’ve wasted your time. After collecting my thoughts, I really did like it, but that’s coming from a film fan. If you’re the average cinema goer, it might not be your first choice, but if you give it the time and respect it deserves, you’ll be left smiling and glad that you decided to give it a shot.