hello there! how's it going? I'm good! London Film Festival is nearly over, but I'm soaking up the films whilst they're still available to really make the most of this time! I've already reviewed a lot of the feature films (over on https://closeupculture.com) and a few short films (I've recorded my thoughts over on the podcast which you can listen to here: https://open.spotify.com/episode/3SeSNREq8R2nu1F6jiaGpK?si=5wKTLoweSv2_2wNv5RNprg&utm_source=copy-link), but I thought that I'd spend some time today watching some more short films and giving them the love they deserve! I really do love short films, so let's watch some, ay!

Two kids chasing chickens and playing football in the backstreets of Accra make friends with a rich guy. Their joie de vivre brings about a change in him.

This film really stands out for me. Films are oft en filled with bad guys and dangers, but this was a refreshing take on that in my opinion. The idea that someone can change their thoughts based on being with someone really reminds us of how beautiful life and individuals are. To witness children living in joy and excitement, was brilliant, and the 2 young actors playing the parts of the children really were great. They jumped completely into the roles, even pushing me to want to love and care for them, which is what happens in the story. We're always taught to not speak to strangers, but that's how this story starts. I loved the richness of the colours and the bright lights, really leading us along with this story, but as things turned to night, so did the happiness. From the performances to the music, this short really is big and bright, giving me hope in a world full of films and real life events like Taken (Liam Neeson will come for u). 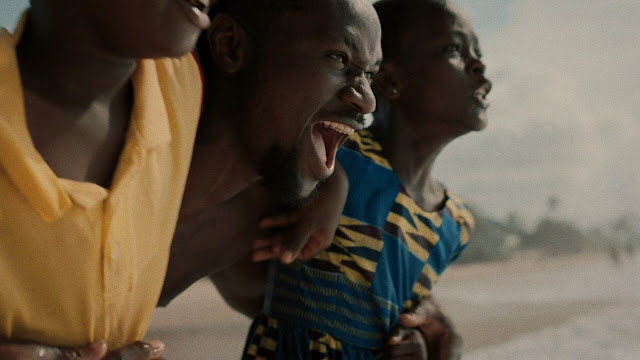 13-year-old Maya is taking care of 10-year-old Guy, who is diagnosed with Asperger’s.

Sweet and simple is how I'd describe this one. Looking into the lives of children who care for each other can be dark and gritty, but they can also be inspiring like this one. Bechora looks at a brother who is being looked after by his slightly older sister. I liked how we could see a range of emotions from both actors, whether they were protective, or wanting to deny each others existence. I loved the light and colours, as it made the story feel childish, like we were in school with them, but the harshness of the locations grounded it, making the character of Maya appear more grown up. I liked how simple it was, hitting straight to the point of how siblings must feel if they see their brother or sister being bullied or hurt in school. It felt refreshing, and I really did enjoy it. 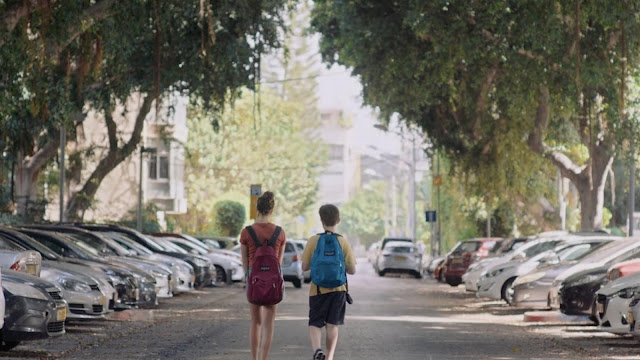 On a hot summer’s day, mischievous teenager Gal takes a dip in her favourite nearby pool and unexpectedly encounters a group of Hasidic boys.

A beautiful summer haze makes this film feel like a dream, but being kept on the edge of our seat by the main character made it feel scary also. I really loved the camera work, the idea that we were also on holiday with the girls, with a handheld style. The location was as stunning as anything, really putting us into a holiday mode, but at the same time fear for strangers coming onto the land. All the short films so far today have been foreign language ones, but this is the one that I feel I can relate to the most. Not just the ginger hair, but the idea of siblings and wanting to not have anything to do with each other, yet still being there. I liked this take on religion, but also how it wasn't anything to do with it. I feel very still and calm after watching it, mainly to do with the sounds of the pool! 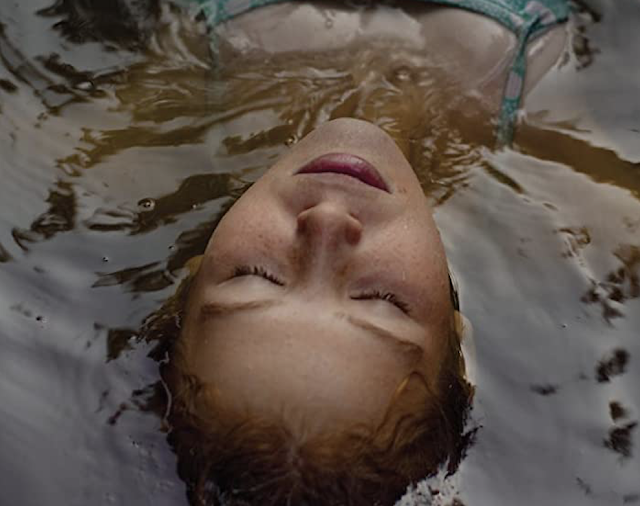 Lynn is caught in a heady mix of depression and self-determination. After a debauched night of setting boundaries and crossing others, he realises his path is his own to define.

From the grand music to the bright neon lights, this film was a fantastic look into the life of someone who knows that they need to change, they just need the push to start them off. I liked how so much thought had been put into it, not just the script and the acting, but the way it looked too. This made us want to become part of the world, but when we discovered more, we realised that didn't want it just like the characters in it. I really appreciated the juxtaposition from the start to the end of this, showing how clearer and brighter life can become if we make the decision to follow that path, rather than one that's bad for us, and the main actor was brilliant at showing us this story and giving the role all that it deserved. 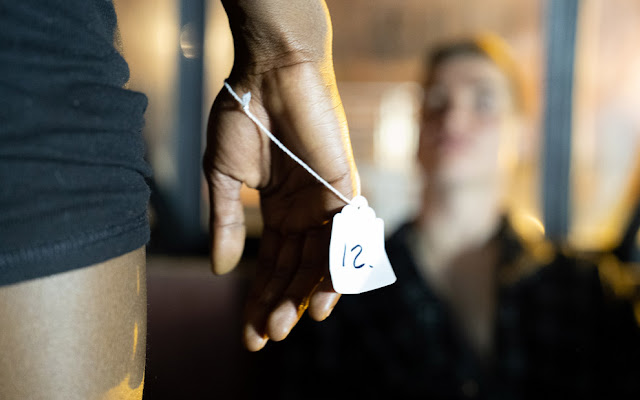 Carl is king of the court. But today he’s very distracted. This highly amusing comedy playfully combines homoerotic vibes with toxic masculinity on a badminton court.

With a Wes Anderson-esque charm and unique playfulness, this film really charmed me, and also filled me with so many questions. I really fell in love with this world that we were thrown into, the colours, the film style, and most importantly, the incredibly comedic characters. I've seen things like this, but at the same time I've never seen anything like it, really hooking me from the start. It made me think of old English country fairs for some reason, but I just loved the style of it all. The script was brilliant, as well as the editing, batting us around the story like a shuttlecock in play. I think this has got to be one of the favourites that I've seen during this festival run, and I'm sure that it'll be one that I remember for a while! 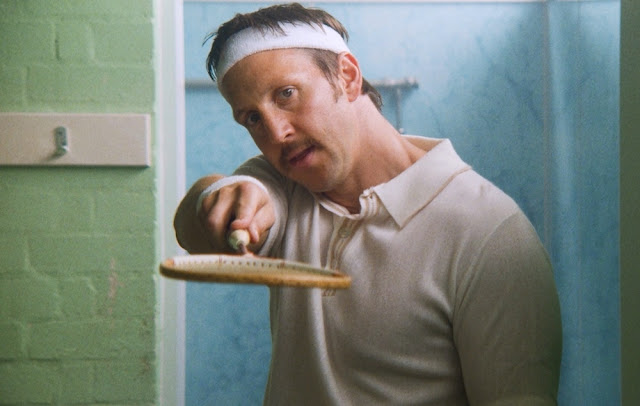 It’s a sweet day for two drug dealers. Heading out to parties, selling to insanely posh folk and eating patties, these are the little things that make people more than just friends.

For the final short film I'm gonna review for the festival, here we have something gritty, but also quite fun! When we see drugs and dealers on our screens, their worlds are often crazy, dirty and dangerous, but this film made it feel quite sweet and heartfelt. Obviously it doesn't advocate going into the drug trade, but it does show how friendships can build, and everyone can be involved, not just typical stereotypes. I loved the look into these 2 guys lives through great camera work, and one of my favourite scenes when they're at the party, the editing style was so cool. It felt warm and homey with the colours and light, but with the script, we were bought back down to earth that the grind doesn't stop, but neither do the police. I think this is a great London story, and one that I'm glad to have seen! 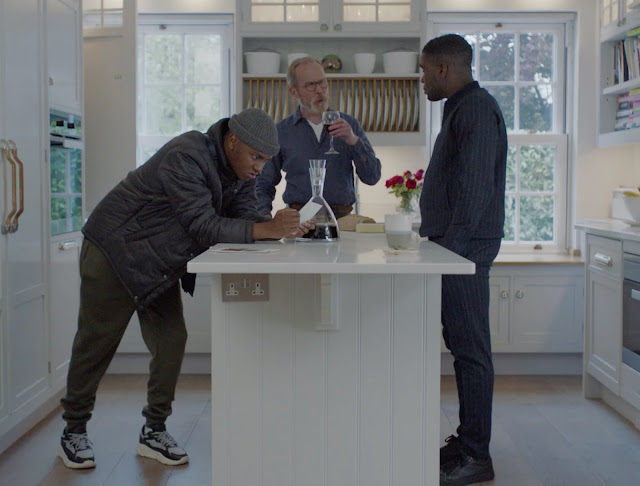 So there is my coverage for the short films at this years BFI London Film Festival. So many brilliant new film makers and stories, really doing fantastic jobs! I hope that these films get the love they deserve, even if premieres and things haven't gone to plan due to covid. I'll either see you at next years festival, or in my next post! I hope it's all ok with you future anna.