My Thoughts: Dolly Parton's Christmas On The Square!

lol, this was meant to be posted at the start of December on a website there to help young writers. it wasn't, even though I messaged them to ask about it (they even replied and said it would be!!). I gave them the near whole of the month as the benefit of the doubt to see if they'd post but they didn't, so I'll post it on my own blog then xoxo

if they see this, hi, no bad blood I hope, but it's a Christmas film and I want my words to be shared before Christmas and seeing as you're not posting it, I'll do it! 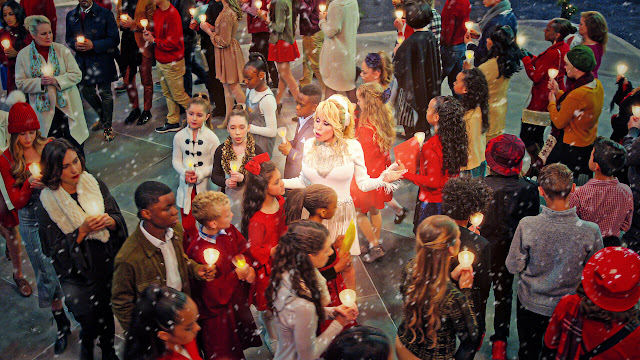 I settled down with a cup of tea, ready to get into the Christmas spirit and I wasn't disappointed. Netflix's latest festive film is based on a stage play called 'Christmas on the Square’ and features 14 original songs written by Dolly Parton herself. From the start, we feel like we're watching a classic, old-fashioned seasonal movie. It's predictable, and has throwbacks to films A Christmas Carol and It's a Wonderful Life (mentions to George Bailey and Clarence are fun little Easter eggs), but doesn't every festive film? I think it's something that you'll either love or hate, but I think that's the case with all films like this, some people want to get into the spirit whilst others just don't.

For me, it did feel a little over the top. It felt like we were seeing a theatre set come to life, and personally, it would've had a greater effect if it was performed on stage to an audience. Being a film instead, it felt slightly cheesy, not having the full effect of really pulling us into the story and connecting to the songs.

Dolly Parton, as well as writing, composing and producing, plays the angel watching over the town, specifically the character of Regina Fuller. I loved seeing Dolly as this angelic figure with a fantastic sparkly white wardrobe and motherly feel to her. After it being released that she donated a large sum of money to the Covid-19 vaccine efforts recently, she really has come to light as someone who is more than just a country singer. Doing some light research on her, she really is a fantastic woman who has no plans in stopping. She really does emit fairy godmother vibes, and I'm sure that some people will find her role slightly OTT, but you can't deny how fabulous she is. Christine Baranski plays the mean Scrooge-like character Regina incredibly well opposite Dolly. We know that she is a top singer and performer, so to see her be challenged with this mean role was a lot of fun. Of course, we can predict that her heart and mind will change, but it really struck me how well Christine plays out emotions and can fill a space with her song, especially through the few twists and u

Turns that the story offers. I'd love to see these two brilliant women together again in the future, but until then, I can enjoy them in this, although I don’t know if I can see myself re-watching the film soon.

Someone I'd love to mention is Selah Kimbro Jones. She plays the character of Violet, who is Tiny Tim-esque, but really brings some spark to the role. First of all, her voice stands out against the adults around her so much. When she began, I couldn't believe how talented she was, and to duet with Christine, she really is one to watch. For a film that screamed Hallmark, Selah did well to play a child who had gone through so much yet with the help of the town she was happy again. I was happily surprised with her skill as an actor, even though she was so young. To be the only main child role, it must've felt quite intimidating, especially with the cast having some real stars, but she was professional and real in her portrayal.

For a new film, it had a great diverse cast of performers and dancers which really bought everything to life, but there still wasn't the disability or LGBT+ people or storylines shown that we do want as a modern audience. I guess in every film there will be something lacking, and it was that in this film for me.

Simply, this festive film is there to raise Christmas spirits as well as look at the characters just trying to find love, understanding and forgiveness. It's simple and nothing new compared to what's already on the market, but at the same time it does have a glimmer of something different, and I think that's predominantly down to the people in it, as well as the music. I'm not saying that it'll be in the charts, but with Dolly Parton being a major part of it, who knows what may happen.

So, it's been a few weeks since I've watched the film and I think the only people I know who have seen the film is me and my family lol! sorry Dolly, we still love ya!