An aspiring drag superstar is stuck working in a cannery in Alaska. When a boxing coach sees his potential, he has to face the real reason he is stuck in Alaska.

One of my favourite stage shows that I’ve ever seen is Everybody’s Talking About Jamie. I just loved how fun and real it was and was over the moon when I heard that they were turning it into a film. To fill the void until then, I was pleasantly surprised to see this independent film jump out at me as I was scrolling through Netflix. I don’t want to compare the two, but I’m going into this with a love of something similar, so just know that I really enjoyed this too.

With dreams of being an international superstar, Leo (played by Martin L. Washington Jr in his film debut) skips around his small town aware that not everyone agrees with who he is, but not letting them change him. Flamboyant and unable to choose between boxing or drag, Leo’s story is an interesting one. I loved how it wasn’t typical in his family disowning him (although leaving in a different way is a large part of the backstory) or some other stereotype. Instead, it was something different, which really kept me guessing throughout how Leo would end up and who he’d choose to become. Often with his sort of story you can assume where the characters will end up, but with Alaska is a Drag, I really could just sit back and enjoy, letting the characters tell the story for me. 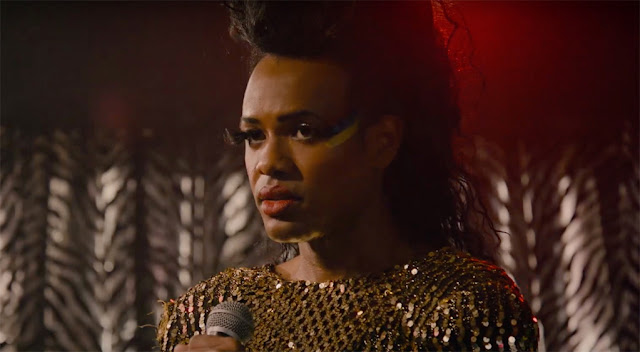 Starring opposite Martin is Maya Washington as Tristen, Leo’s super supportive sister who is dealing with illness. I subscribe to Maya’s YouTube channel and couldn’t believe it when I finally recognised her. The pair really make a wonderful sibling duo, showing us how brothers and sisters should be written. The journey they go on is something of beauty, but it doesn’t start like that. The writer wants us to know that even though life can feel fabulous, it can often fill us with fear. Tristen says, “Do you want me to pick you up after work for protection?” so casually in the first few sentences that from the start, we know that everything isn’t fine and dandy. It’s awful to think that people grow up, scared to be alone because of what others may think and do to them because of that.

Written and directed by Shaz Bennett, you can tell how important this story is to everyone involved, truly wanting to get across that people can be gay, but that isn’t everything they have to give to the world. Her film was described as ‘one to watch’ by Vogue, OUT Magazine and more, and you can really see why. Each line is so real and fluid in how they pass between the characters and come to life when they’re said.

The editing and style struck me as delicate yet gritty. Walking through fields causes hundreds of dandelions to fly through the air, whilst on the other side of the building wall is a grey concrete gym. We see this glittery world through flashbacks and sudden daydreams, but all of that stops as soon as a bully wants to punch, or the truth of their mother leaving hits them harder. It just added to this feeling that dreams can come true, but we all start in what feels like a dead-end place. Whether it’s our location, family, or something else, everyone has something stopping them, but to see past that and push on is what makes our wishes become our reality.

Down to earth and inspiring, Alaska is a Drag has left me with a smile on my face. Not everyone we meet in life will like us, but as long as we hold onto and support the ones that do, life can be good.

The film is available to watch on Netflix. This review is part of my 2021 LGBT+ History Month event, and you can check out my other reviews here on my blog, or see more on my Instagram: anna.create