LGBT+ History Month: All In My Family Film Documentary Review

All In My Family is a Netflix documentary, directed by and following the life of Hao Wu. He is gay and has chosen with his partner to have children via surrogates, but this is far from his traditional Chinese families understanding and acceptance.

With sweet, Pixar-like music and scenes of fun family meetings and dinners, this film appears quite happy and loving, however I had to stop myself laughing at times, realising that this isn’t a comedy, yet someone’s bittersweet life. I’m sure if you’ve seen it, you will have felt the same, finding comments from the older generation quite comical at times, yet world-shattering to the person sat behind the camera.

Flicking between New York, a place where you can express yourself without worry, and China, where elders and tradition are the most important things, we can begin to understand Hao’s thoughts and feelings towards both of these places. Sure, one is easier to live in, to be who you truly are without hiding, but the other is a true home as family is there. When people do come out, however their family reacts, it can be difficult to know what to do next. Should you stay in a place that makes you feel like you can’t be true to yourself, or should you move away but leave the people who do care about you? Families have funny ways of showing things, and I think that this documentary is a lovely reminder that not everyone agrees with everything we do, but if people love you, they will eventually come around. 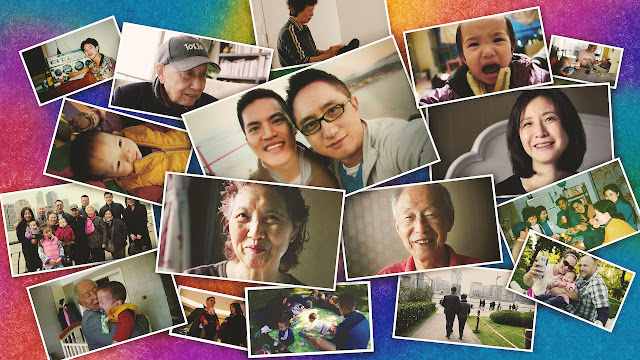 A big discussion I see online is whether we should allow the older generation to keep their out-of-date opinions, or if we can get angry at them and call them out. TOTALLY different, but in a film called The Mule, Clint Eastwood’s character goes to help some black people who have broken down on the side of the road, however, calls them an old, rude slur name when addressing them, not meaning any harm by it. I don’t want to defend him, but if he has grown up in a world seeing this as the right word, and no one has called him out, how can he know it’s wrong? Similar with this film, if Chinese people grow up living a certain way, of course it’ll be strange and confusing for someone to present a different way of life to you. For me, I can accept my grandparents or the older generation saying something rude once, as I’ll then kindly tell them how times have changed and what’s been said is unacceptable, as I don’t think it’s fair to be angry and shout if they genuinely do not know. But if they continue with this, it makes me wonder if they’re doing it just because that’s what they’re used to, or to be rude and complicated to make fun of the “snowflake” generation. I love how this film allows the parents to have their opinion heard, but also the chance to grow and learn about how the world works now as opposed to then. We all react differently too, some people having no leeway in people saying something wrong, whereas others have to have patience because they’ll lose the people around them without it. Hao was able to keep composure at all times, even when his family were being quite rude with their feelings towards him and his choices, which just adds to the heart-breaking feelings that this film wants us to see.

This homegrown film really is something fresh. Even though it felt professional and clean cut, it was really great to see people being interviewed in their homes and in their native language. It made it feel cosy and easy to settle down into watching, just like the people would’ve felt talking in the natural situations. But it also added to the fact that so many people feel like they lose home, or even themselves after coming out, even if they are in familiar surroundings. Simple yet effective, I’m so glad that Hoa had the courage to share his story with both his family and the world, as I know that I appreciate it, so I’m sure every other watcher does too.

The film starts with photos being taken of Hao’s family, as he states that he doesn’t even know who a lot of the people are. Mirroring that, the film ends with photos being taken of his new family, I guess to keep up with family tradition, but also to symbolise that it’s ok for people to drop out of your life whether you share blood or not. What’s important now is holding onto the people around him who love him for who he is and making sure that his children grow up knowing these family members.