Just for the record, I will be using the pronouns she/her for Marsha. According to Tatler, Marsha sometimes identified as gay or as a drag queen, but transgender wasn’t really a widespread term at the time she was alive. With research, it seems that there is no particular right way to address her, even her family and friends in the film use a range of he/she/they. If you have any other research or knowledge, please let me know so I can change my writing accordingly and respectfully.

Marsha P. Johnson was a trans-rights activist who played a big role in important moments for the LGBTQ+ movement including the Stonewall protests for which she was nicknamed the "Saint of Christopher Street" (where the Stonewall Inn is located), because of the generosity she had shown towards people in New York's LGBTQ+ community. The Death and Life of Marsha P. Johnson is a 2017 documentary film that looks at her life and the mystery around her death in 1992 which was initially ruled as suicide by police despite suspicious circumstances.

When this documentary came out, there were a lot of people against it. This was because the film idea had originally come from Tourmaline, a transgender artist and activist. She had spent years archiving, researching, interviewing, and really getting to grips with who Marsha was and the life that she led. However, instead of her making the film, David France apparently stole the idea and made the film instead. Even though he is gay and known for his investigative journalism on LGBTQ+ topics, Tourmaline and others felt that this move was continuing the hurt that Marsha was trying to stop. Instead of giving the documentary funding to a black, trans creative, Netflix gave the multimillion-dollar deal to a white man. When writing this review, I think it’s important to state the facts, and the truth is that even though we as people have come a long way in love and acceptance, there is still not enough being done. Have things really changed? This film was more of a murder, detective mystery than I expected it to be. I thought we’d see the life of a great person and the legacy with that history, but Netflix has made some pretty good documentaries, so I was intrigued in how they were going to present this mystery. Overall, I did like the film and the stories told in it, but I would’ve loved to have seen Tourmaline’s version with the love and creativity, more than the classic Netflix documentary style that people expect. 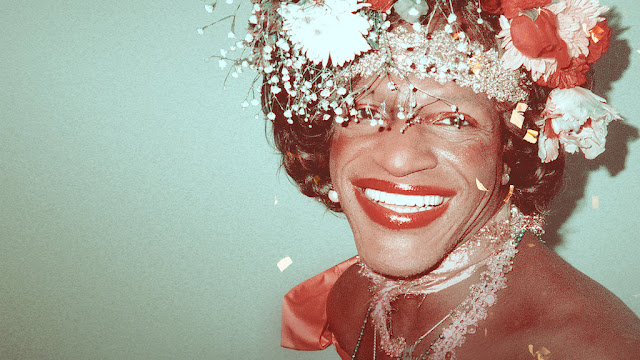 I think I first became aware of Marsha a few years ago. It was pride month and people were positing pictures of her on twitter, reminding the world that a black, trans woman was there at Stonewall. She is one of the people who has made life what it is today for LGBTQ+ people. Seeing her face shared each year, she was always someone who interested me, really inspiring me to keep pushing for love and justice. However due to the problems with Tourmaline not getting the nod to make the film and the arguments about it, I didn’t watch the film when it was released. Now some time has passed, and I want to learn more about this incredible person, of course a film is the first place to turn. Like I said about the murder mystery style, I think I would’ve preferred, even expected, a film about Marsha’s life and legacy, and not death. Although I guess the title gives it away.

Like all Netflix documentaries, we have this clean and crisp style however with this film it didn’t feel quite right with me. I felt lost in time, unsure if what I was seeing was old or new, left wondering if Marsha’s death was more important than her life. Following Victoria Cruz’s investigation, I think the main focus of the film is to let the audience know how so many trans people really do put their life on the line by coming out and that even though Marsha sadly died nearly 30 years ago, things are still awfully bad for people who don’t identify as straight. The editing, pulling in a mixture of archived footage as well as crime-like b-roll, really added to the drama of her death and amplified Victoria’s points. Lingering on certain moments, we were swept through emotions like sadness and anger, pushing the idea that the people with power don’t care for you unless you’re white and like the opposite gender. When we see Sylvia Rivera’s funeral, a close friend to Marsha and fellow gay and trans rights activist, a news reporter describes her life as trying to “protect the rights of this most despised of minorities” and watching it, I had to pause it. It genuinely made me feel sick. I’m sad and angry and tired of human beings not free to be themselves. The way that they are described like wild beats who want to harm people, when truly that’s the description of the people hating them. Watching something like this really is great to learn and understand how life has changed, but it also feels like people are still being kicked down and like it won’t ever end.

I don’t think that there was much music, but when there was, it was deep and used strings to create thrill and worry within us. Again, I liked this style, but I think when showing archived footage, it would have been really nice to use lighter, brighter music to portray happiness and goodness that Marsha and her friends gave to the world. My favourite use of diegetic sound was the hymn sung at Marsha’s funeral which played over gatherings of people walking in the streets with balloons and artwork and stood near the river in tears. It felt so bittersweet, hearing this angelic song over images of pain. 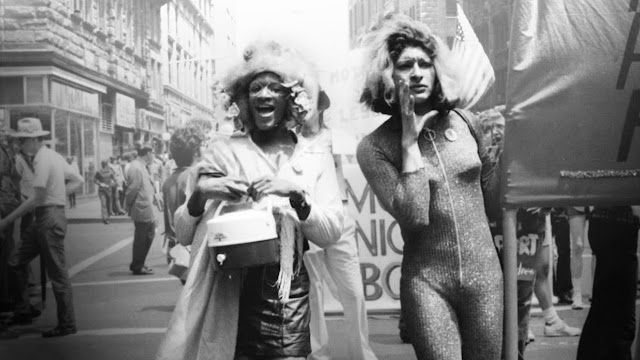 Throughout the film, we see Victoria collect her evidence towards the investigation, and as far as I suspected, it felt like it wasn’t going anywhere. However, about 10 minutes from the end, she fills an envelope, addresses it to the FBI and delivers it. I both loved this ending and felt quite disappointed by it. I loved that even though it feels like the world had given up, someone hadn’t, and often all it takes is one person. To leave us on this cliff-hanger, it amplifies the point that we will probably never know the truth about Marsha, and that deaths will continue unless the people in power do what they should to make the law fair and just. But at the same time, it’s left me feeling sad, feeling like all Marsha was good for was creating a mystery that Netflix could turn into a film. Even to end on this mystery and then show one final clip of her saying something provoking or funny or meaningful, would have bought the film full circle, really letting us see that a beautiful person was taken all those years ago, but her life and love lives on. I guess it’s personal preference, and I don’t know if I’ll ever be able to decide if I liked the way it rounded off or not, but it feels like it’s not the end.

As fellow drag queen Sylvia Rivera said in the film, “She’ll always be in the front of this parade.” I’m so glad I’ve been able to learn more about Marsha “Pay It No Mind” Johnson and the path that she has paved for so many people. She’ll never be forgotten, and I’m glad to see and know that in life she was surrounded by wonder and hope, and that definitely did not leave this world with her. I think without the drama of directors, the film allows the viewer a great insight into the death and mystery of a miraculous woman who deserved all the love in the world. But for me, I was expecting to see more of her colourful life, which a different director may have given to us.