It’s 1770, and an isolated island in Brittany becomes home to Marianne for a short while. She’s a painter, commissioned to do the wedding portrait of Héloïse, a reluctant bride to be. Marianne must paint her in secret, so she observes Héloïse each day.

When this film first came out, I never got the chance to see it and I can’t remember why. On a big screen, surrounded by darkness, this film would’ve been a great experience of love told in the most poetic way. However, I’ve had to watch it on a small screen in my bedroom, but the romance and heart is still very much there.

I loved this true mix of bright, open spaces, taking in all that the house and the scenery outside had to offer. It was light and welcoming, compared to the darkness and shadow of night, really emphasising the silhouettes of the characters. I guess it made them stand out against the blackness, but it often made them sink into it, disappearing away from their true emotions. Claire Mathon was the cinematographer on the project, winning multiple awards on its release, and I love her use of light and dark as well as framing. For me, it made it feel old, like we really were seeing the 1770s come to life. It was clean and crisp but in a way that didn’t make it feel modern and fake. Everything stayed very central, as if each frame is a study for a painting, allowing us to easily follow the action in a dreamy, buttery-esque way. It’s an easy watch for the eyes, only adding to the romance. 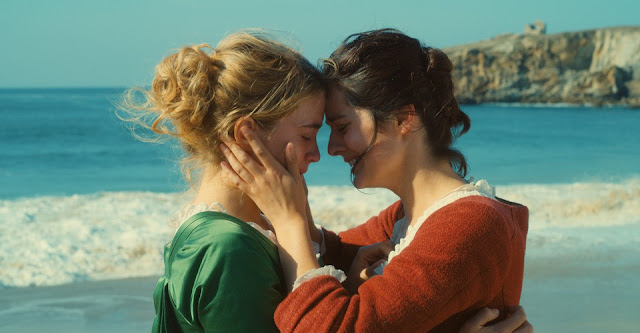 Noémie Merlant and Adèle Haenel star opposite each other as secret lovers and do such a brilliant job at capturing our hearts as well as their character’s, so much so that they were voted as Best Screen Couple in 2019 by the women Film Critics Circle. At times, I felt that the characters felt quite static, but then I had to remind myself that we’re seeing late eighteenth century, and it’s hard enough for people to reveal their true feelings now, let alone come out as liking the same sex back then. This forbidden affair follows the stereotype of period dramas, showing an aristocrat and lowly painter fall in love, but the intensity is heightened with the knowledge that both are women. Merlant and Haenel play what seem to be simple characters, but through great depth in their emotions and body language, we can learn about love and loss at the time when it’s set, but also the history of being gay and how you live life coping with hiding it. It’s the definition of bittersweet. Would you want to live your life in hiding if it meant you could only spend a few Summer weeks with someone you dearly love?

Written and directed by Céline Sciamma, I adore her delicate nature with approaching a love like this. Sex isn’t thrust at our screen, instead, we have respect for the female body and mind. This allows us into the relationship in a way that doesn’t glorify the naked body for views, but for art and intimacy. Sciamma won best screenplay for the film at Cannes in 2019, and has won many others since, truly letting us know that this film is loved and appreciated. Every now and then, a wild card film like this stands out against the multi-million budget blockbusters, and I am so pleased that this film has grabbed the heart of so many.

Beginning in a painter’s studio and ending in a theatre, we see art in all that this film has to offer. After finally seeing it, I fully know why it’s loved and highly awarded just as it deserves. It’s full of marvellous joy, but also great sadness, and every element of the production is something to drool over.

(also, just the fact that they both never forgot about each other and communicated in ways that they’d hope the other would see but would also possibly be discarded or forgotten, I don’t know if my heart is full or broken?!?! Shoutout to the wonderfully talented Hélène Delmaire for her paintings!!! I feel like I have so much to say but I don’t know how haha)