When a hooker finds out that her boyfriend has cheated on her whilst she was in jail, she sets out with her best friend to find him and his new lover to teach them a lesson.

After watching The Florida Project last year, I became so interested with the idea of films not needing to be shot on big cameras with big budgets to really be good. The film Tangerine has always been one I wanted to watch, so when I saw that it was showing on Christmas Day night 2020, I snuck downstairs to record it. Knowing that Sean Baker directed this too, I was really intrigued to see a film fully shot on an iPhone and how that would work. I see lots of films and shorts, and often find that the quality is fantastic, and the look of it is something to remember, but the story doesn’t necessarily match up to that which is a big shame. If people write something so good, but don’t have the budget or the contacts to make the film look professional, I feel like juries and festivals instantly see something as bad quality and assume that the narrative is too. This whole film is shot using lenses and there is equipment to help with production, but to know that we are seeing this film through an iPhone 5s, inspires me, and I hope it inspires others too, to take what we have and just make the stories we want to tell.

I didn’t know what to expect from this film when I pressed play, but I was really intrigued with what I found. Following a day in the life of Hollywood and its people in a way we don’t typically see was a cool twist on the dreams and celebrity lifestyles we normally see in films. When I think of the location, glitz and glamour is the first thing to come to mind, so it’s interesting to think that both the lead characters also think of that, but more about their appearance than the streets they’re living on. Sin-Dee, the woman trying to find her man after getting out of jail is played by the kick-ass Kitana Kiki Rodriguez. She is feisty and strong, not wanting to back down from anything. Her style isn’t something I’d wear personally, but her no fear attitude in a place where she won’t receive love from anyone is a gorgeous reminder that as long as we love ourselves, we have the right to be whoever we want to be. Starring opposite her is the powerful Mya Taylor as Alexandra, a singer who is struggling to do that full time. Even though these women are very different, they both have similarities which draw them together, and even when things fell apart, they knew that they had each other. I just loved seeing two forceful and energetic women on my screen, instead of the classic stereotypes of having one of them be shy, or have an illness, or something rubbish. Why can’t we have more of this? 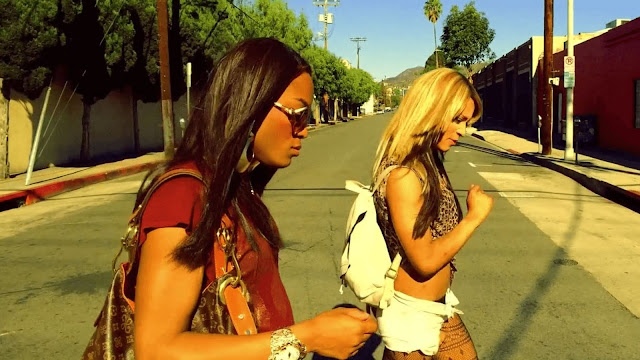 Seeing not one but two trans females heading this film is the beautiful breath of fresh air. I saw a short film recently (Trashy Booty) starring two trans women and it made me so excited for the future of representation in film. That short came out in 2020, and even though they’re slightly similar in style, it’s interesting to see Tangerine and its comments on transphobia and homophobia just 5 years prior. Even though it feels like nothing has changed, so much has, and it’s representation like this that keeps pushing it, allowing people, whoever they are, to be safe, seen and celebrated. I think this film is also a good conversation starter for people working in the sex industry. I don’t feel like the best person to talk about it, but this film really does push the boundaries, something I didn’t really personally see until 2019 film and TV releases.

We start in a donut shop and think that it’ll end there too, but the journey of colours and lights really create this dream-like atmosphere. Even though I spotted a tangerine air freshener in the taxi, the film is called Tangerine due to the orange hues and colours. Seeing the bright west coast sun set was stunning, and something that you don’t really notice, yet is always there. These bright colours made the film feel like a crazy neon experience, but at the same time, it created this happy and content atmosphere. Both of these descriptions, I feel at times, work well to describe the film we’re seeing, but as the story fluctuates, it’s nice to always have familiarity with the sky over head and the colours flaring through the lens. From sight to sound, I loved the variety of music that played throughout. It struck me how important each track was to convey emotions and things changing. It’s definitely a soundtrack that has stood out for me, swaying between unexpected classical songs to dramatic rock and pop.

Watching this film, I really felt main character vibes, and I know that’s an odd thing to say, but social media has been obsessed recently with the idea that we should all play the main character in our lives. My playlist is a mix of so much, and I have my phone in my back pocket ready to capture life as it plays out in front of me. If a day like the girl’s in Tangerine have is captured for us to see, surely my days are worth appreciating and experiencing to the full too. This film really has struck a chord with me, both in heavier topics like I mentioned, but most importantly leaving me with an inspiration to love the mundane and make the most of it. I guess I’d better find a donut shop that opens late near me.