My Thoughts After Rewatching Game Of Thrones

hello people of the 7 kingdoms and further afield. When Game Of Thrones first came out, I was all over it, and when it ended, I was part of the people who felt disappointed by how we'd been left. It's been nearly 2 years since the finale episode first aired and people are still angry. I'd originally watched the show with my dad, and with my mum along for the journey too, we decided to rewatch all 8 seasons.

Obviously there are lots of Game of Thrones spoilers ahead!

The first reason was just because we loved the show, enjoyed the characters, and knowing where it'd end up, it'd be fun to see the foreshadowing and just relive some of the amazing moments again. We really wanted to introduce this to great show to my mum too, even though she always googles spoilers so knew the ending of it all before we'd even finished the first episode haha!

The second reason for us watching it again was due to the final 3 episodes and the let down that a lot of the world had felt with them the first time round. We wanted to give it a second chance without the big expectations and with all that being said, here are some of the dumb thoughts that came to my mind that I kept track on my phone whilst watching all the episodes for the past few months:

dany and her story is so boring

ughhhh whenever Dany was on screen I could have screamed. I found the start of her story exciting, being given away to marry but receiving the dragon eggs, but every other time we saw her I found her so boring. It might've been her story, the fact she wasn't in Westeros and interacting with everyone there, I don't know, but people adore her and I just do not haha! I think as well because all she does is the same thing over and over, and in the end when we get to where she wants, she bloody kills everyone!!!!! she got what was coming to her, sorry not sorry xoxo

Brienne changes her loyalty so quickly

I love Brienne, so much, but she's with Renly and then Cat and then she's not with Jamie but kinda falls in love with him and I dunno, her switching sides just seems to happen so fast. It's wild to me that in this sort of world, if you come across a stranger they're either gonna rob you or kill you, and if you're lucky it may be both, so I understand that actually switching loyalties may work to your advantage, but for her to do it so quickly when we're first introduced to her, it kinda ruins her big sayings about oaths and keeping promises.

bran is bloody annoying, and apart from going back in time to find out the truth, I hate when his story is on screen

my mum felt the exact same. Bran is an annoying lil whiney boy who turns into such a freaky weirdo and he can't do anything for himself and ughhh he was just a bit boring. unless we got to go back in time and see the groundbreaking truth, I did not want him on my screen.

first time watching, Sansa annoyed me, but she has one of the best character progressions

yep, the first time I watched the show, Sansa stressed me out a lot. Most of the time it wasn't her fault because it was down to her situation and other people, but I was so on the side of Arya and wanting to learn how to fight so I saw her as annoying. But seeing it again, her character growth is phenomenal, and what she goes through just proves to anyone that it can be tough but you can still end up as a queen. go her!!!!

the hound would be a good guy to be with

When we first meet the Hound, he's presented to us and this big, tough, scary guy, but the more we get to know him, he is one the most selfless and sweet people. if I had to be with anybody in any situation, I'd pick him. maybe not in a fire though.

Arya and Gendry having sex annoys me so much, so out of character, I think having them chat and maybe end with a kiss would be nicer

oh no do not get me started on this!!! I hate mushy relationship stuff in things like this, so to take it to the next level and have these 2 people who kinda had chemistry but also sort of a sibling relationship in my eyes to suddenly be crushing on each other was kinda weird to me. so to top it all off with sex was not something I wanted to see.

the trial of little finger is so good

oooooh sweet sweet justice, I adore this bit so much!!!!!!! "shall we begin" "I suppose so" "you stand charged with lots of crimes, how do you plead.... little finger?" OOOOOOHHHH YES BABYYY!!! rip Peter xoxox

Brienne being knighted is so sweet

my heart!!!! when some of our fave characters are all sat in the great hall before the battle in S8 E2 (I think) and Jamie knights Brienne omg I have so much love for that moment!!! and Tormund crushing on "the big lady" omg iconic!!

lyanna Mormont and pod are my heroes

if you ask me who my fave character from the show is, I'd say Arya, but wow Lyanna and Podrick have my whole heart. they are so strong and interesting and clever and they stand out and I just think that they're so so so cool! I also think that Theon is fantastic.

the unsullied take such tiny steps

if I have to listen to one more of Tyrion's speeches I will scream!!!!

the final episode is just one big Tyrion speech. he drinks and he knows things but sometimes I just wished he'd shut up. please Tyrion, please. 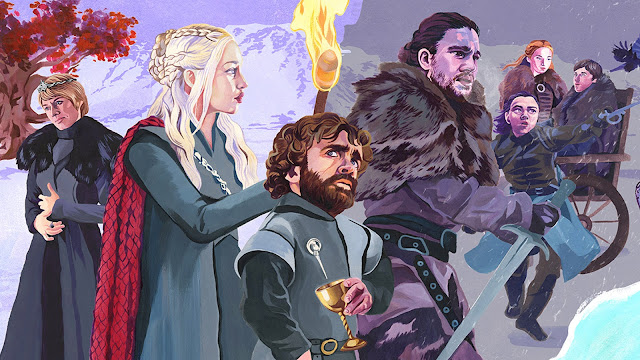 so those were the random thoughts I wrote down on my phone whilst rewatching the show with a bit of a description for each too! now onto the good stuff, did I think the ending was as bad as the first time.

in short, no. I think when you watch a show as big as Game of Thrones, you expect something so major, and with the rest of the series being crazy battle after battle with all of our favourite characters united, you expect that. to end a well loved round the world series must be so tough, and you're never going to please everyone, but watching it a second time, we see what we need to see but leave it in a way where our favourite characters' stories are tied up but also left open. we want for Arya to kill everyone, for Jon to be king, for Sam to do something spectacular and for the others to continue being their great heroic selves, but that doesn't happen and that's ok. if it was what we wanted, we'd say we had predicted it and it would've felt boring in some ways, but keeping realistic in its approach does work. I know why we were all so disappointed, but I think my response to that is to do what I've done and watch it again. don't worry about what will happen, have no big expectations, just focus on why you enjoy the show and it will end enjoyably for you.

and if you still hate it, that's your problem xoxo